Neha Dhupia and Nikhil Chinapa Get Trolled, But Ranvijay Wins Hearts For Being A True Gentleman!

Even we have maintained in our stance that while physical violence is not accepted, we also believe that even verbal assault and bullying is equally disgusting (even if the format of the show demands it) 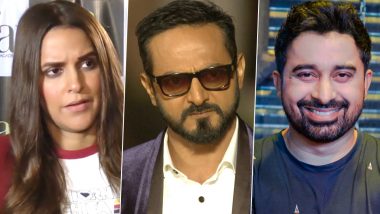 Thank God we have Twitter for the platform allows people to call a spade a spade. People choose to state what is obvious. And it is quite obvious that netizens (including the ardent fans) have not liked what Neha Dhupia and Nikhil Chinapa had to offer on that notorious episode of Roadies Revolution. That was not quite appropriate in the name of entertainment, in the name of being (fake) feminists or even in the name of being fair with your judgments.

Even we have maintained in our stance that while physical violence is not accepted, we also believe that even verbal assault and bullying is equally disgusting (even if the format of the show demands it). Mind you, Ranvijay was on the same panel and yet his reaction to the whole episode showed who he truly is; a through gentleman! Ranvijay was balanced. He did his job, And above all, he did not go overboard or over the top unlike Neha and Nikhil.

Neha's response barely explains the obnoxious tone she had adopted while dealing with the contestant. What the guy (the contestant) was made to do while explaining the accounts of the event was nothing short of public humiliation. Remember, he was dealing with 4 or 5 people at the same time who were shooting sharp verbal arrows at him. The only individuals who did not lose their balance and dignity are Ranvijay and Raftar. While Ranvijay has always been his dignified self, Raftar concluded the episode by handling the situation really well! Roadies Contestant Slaps 'Cheating' Girlfriend': Neha Dhupia's Response To Trolls Barely Explains Her Obnoxious Tone and Derogatory Stance!

The reality is this: Those who watched the episode could clearly see the real picture. Some even felt that Nikhil Chinapa and Neha Dhupia abused the platform and the power given to them. Ranvijay on the other hand was grace. His anger was controlled and he did not resort to using 'fake' aggression to drive home a point. After Neha Dhupia, Now Husband Angad Bedi Gets a Taste Of His Own Medicine; Netizens Shout 'Abey, Tu Sunn Meri Baat'

One fan wrote "Ranvijay has alway personified class. Even if the format of the show allows you, in fact, expects you to be angry, he did not misuse the authority of judge. Hats off to you sir @ranvijay

Another fan maintained "Ranvijay is a real hero. Neha and Nikhil looked like they just went with the flow without realising what they were doing. Pure dumb ass and irresponsible. Ranvijay kept his calm and he wins my vote!"

Another message read "Bullying is not done. Bullying with a faulty logic is just not acceptable. Both Nikhil Chinapa and Neha Dhupia looked drunk with power and arrogance, more arrogant and irresponsible than the contestant they were dealing with.  I liked the manner in which Rannvijay handled the situation and himself. I have always respected his dignity and behavior both on and off screen."

"@Dhupia Neha called that contestant tu. What she thinks of herself? A couple of class above the aam contestants? Time to learn from @Ranvijay. He is a gentleman" read  another response.

(The above story first appeared on LatestLY on Mar 23, 2020 11:29 AM IST. For more news and updates on politics, world, sports, entertainment and lifestyle, log on to our website latestly.com).