While many of them agreed to the part where Neha advised against slapping, the netizens were offended by the gender bias trickling through her statement. 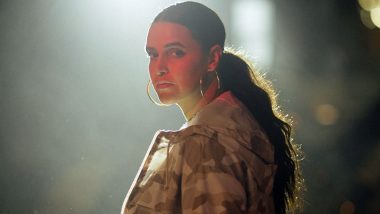 Bollywood actress Neha Dhupia Bedi is currently facing the wrath of the netizens. She is right now seen as one of the mentors of the reality show, MTV Roadies' Revolution season. A video from an episode went viral where in a contestant confesses of slapping a girl for cheating on him with five other boyfriends. Neha is seen slamming the contestant saying that it was her 'choice' and no one has given him the right to slap her. MTV Roadies Revolution: Contestants Reveal Some Heartfelt Stories During Pune Auditions.

The netizens were baffled with her advice and labelled her as 'fake feminist' on the social media. Twitterati is also making memes over the same, criticizing her statements made on the show. Here are some of the reactions that are floating online.

Meme On The Incident

Video With the 'Jethalal' Twist

Jai ho @NehaDhupia ppl like you are not worthy to sit and judge @MTVRoadies. She is a blot in the name of judge. @MTVIndia remove her from the show. Shame on @NehaDhupia #fakefeminism #NehaDhupia pic.twitter.com/Tp9NlGClX7

Feminism Is About Equality

#NehaDhupia is biased. She’s a true feminist no doubt in that but her principles are different for girls and boys and honestly feminism is about equality not superiority.

#NehaDhupia should stop this business of promoting pseudo-feminism. We need to provide equality to both genders and promoting chauvinism or feminism will never bring about equality in the world. Fight for equality, not for a gender or community.

Actually i have 5 other GF's and for that my first GF slapped me. Ma'am @NehaDhupia can you please tell her it's (his) choice. #CHOICE #NehaDhupia

@NehaDhupia ma'am I'm cheating my gf with 4 other girl's ,can u please tell her to stop fighting with me as it's 'him' choice. Faltu pagla Rahi h woh.#NehaDhupia

Women like #NehaDhupia are more dangerous then any other virus!

Physical abuse isn’t right but cheating on your boyfriend with 5 other guys is highest level of shamelessness.

In the video, we see Rannvijay Singha listening intently to the conversation that is happening. While many of them agreed to the part where Neha advised against slapping, the netizens were offended by the gender bias trickling through her statement. Soon, she became a top trend on the micro blogging site. As of now, no one from the MTV roadies team or the anchors and even Neha has commented on this trend. However, the internet is in no mood to keep calm and we wonder how she reacts to this sudden outburst on the social media. The latest season is catching up with the audience with the even more fiery content in it. Stay tuned for more updates.

(The above story first appeared on LatestLY on Mar 12, 2020 04:56 PM IST. For more news and updates on politics, world, sports, entertainment and lifestyle, log on to our website latestly.com).