Recently, the cast shot for a Janmashtami sequence where he climbed the human pyramid. 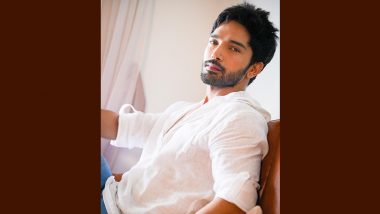 Harsh Rajput is a part of Colors’ Pishachini and the audience is already in love with his performance in the show as Rocky. Recently, the cast shot for a Janmashtami sequence where he climbed the human pyramid. The sequence is how Pishachini is exposed after the holy curd falls on her and she has the entire family smitten with her magic apart from Pavitra. Pishachini Spoiler Update: Pishachini Gets Exposed Amid Janmashtami Celebrations in Colors’ Supernatural Drama!

Well, in conversation with Saas Bahu Saajish, Harsh mentioned his experience shooting for the sequence. While he initially attempted to break the handi without the harness, he had to wear it for his safety. Speaking about the same, Harsh said, “It was easier shooting without the harness but then looking at my safety I had to put it on. By God’s grace, I am fit and can balance myself well. We had quite a gala time shooting for the Dahi Handi sequence.” Pishachini: Nyrraa Banerjee Says “It Has Been a Tricky Shoot; the Show Gives Me a Great Opportunity To Experiment as an Actor”.

For the uninitiated, when the holy curd will fall on Rani and she will transform into Pishachini, thereby exposing herself. She will have everyone smitten with her magic except for Pavitra. Pavitra will try hard to bring them into their conscious state but will fail. Here, Pavitra will be seen protecting her entire family as she is the one who knows all the answers to Pishachini’s magical powers.

(The above story first appeared on LatestLY on Aug 22, 2022 01:16 PM IST. For more news and updates on politics, world, sports, entertainment and lifestyle, log on to our website latestly.com).