Shaandaar Ravivaar will be aired on five weekends between Navratri and Diwali and will see a host of performers like Shehnaaz Gill, Bharti Singh and Haarsh Limbachiyaa, Aditya Narayan, Rashami Desai, Sayantani Ghosh, Maniesh Paul and Vibhor Parashar among others. 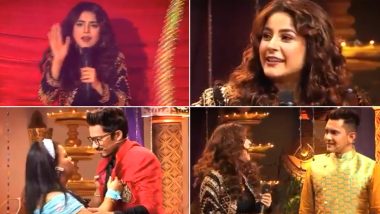 And Shehnaaz Gill is back. After becoming nation's sweetheart in Bigg Boss 13 and a not so nice performance in Mujhse Shaadi Karoge, Shehnaaz Gill is all set to entertain her fans with Shaandaar Ravivaar, a special two-hour programme that will begin from Navratri weekend until Diwali. Shehnaaz will be seen sharing the stage with Bharti Singh and Haarsh Limbachiyaa and we've already seen a glimpse of the trio's comic element. Shehnaaz Gill is Prepping for Something and We Hope it's for Bigg Boss 14 (View Pics).

The makers released the promo for Shaandaar Ravivaar where Shehnaaz first sets the stage on fire with a Wakhra Swag performance, followed by Gill deflecting Haarsh's flirtations in true comic style. Shehnaaz Gill's Weight Loss And Transformation In Latest Pics Stun Her Fans!.

"The objective of the show is to bring entertainment to the audience. Popular names from the television and music industry have been roped in to perform for this special event. It’s a bid to make Sundays more enjoyable for all, as we gear up to celebrate the upcoming festivities," a source reveaed to India Express. Are you excited?

(The above story first appeared on LatestLY on Oct 19, 2020 11:06 AM IST. For more news and updates on politics, world, sports, entertainment and lifestyle, log on to our website latestly.com).