The popular show Yeh Rishta Kya Kehlata Hai has been around for quite a few years now. And the famous jodi of Naira and Kartik. 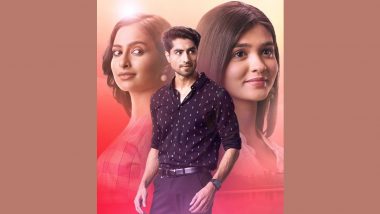 The popular show Yeh Rishta Kya Kehlata Hai has been around for quite a few years now. And the famous jodi of Naira and Kartik (Shivangi Joshi and Mohsin Khan) has a special place in the hearts of the audience. Now the duo are set to bid adieu to the show which is taking an eight-year leap. Post the eight-year leap, three new characters from the new generation namely 'Abhimanyu', 'Akshara', and 'Arohi' will be introduced. The three actors who will be seen playing the roles are Harshad Chopra (he plays the role of Abhimanyu), debutante Karishma Sawant (she plays the role of Akshara) and Pranali Rathod (she plays the role of Arohi). Cyclone Tauktae: Yeh Rishta Kya Kehlata Hai’s Sets In Gujarat Get Destroyed; Karan Kundrra Shares A Shocking Video.

Debutante Karishma adds about her on-screen character and says: "Being a newbie in the industry and to have the pleasure of being a part of such a huge show is like a dream come true to me. Right now, I am just looking to do something out of the box that challenges me and seems beyond my reach. People can expect a lot of surprises from me, as I am surprising myself every day. I am really looking forward to the appreciation and love of the audience for my new journey on Hindi television." Yeh Rishta Kya Kehlata Hai to Taarak Mehta Ka Ooltah Chashmah, How Long-Running TV Shows Remain Unaffected Despite Hit OTT Series.

Pranali is also excited on being part of this show and getting a bigger opportunity to showcase her talent. She adds: "I am over the moon to have received this great opportunity and extremely thrilled to be a part of such a huge show, and I greatly hope for the audience to accept and love my character. As soon as I was handed the script, there was no turning back from there onwards as not everybody gets to be a part of a show like this." Produced by Rajan Shahi under his banner Director's Kut Productions, Yeh Rishta Kya Kehlata Hai  airs on Star Plus.

(The above story first appeared on LatestLY on Oct 21, 2021 05:59 PM IST. For more news and updates on politics, world, sports, entertainment and lifestyle, log on to our website latestly.com).