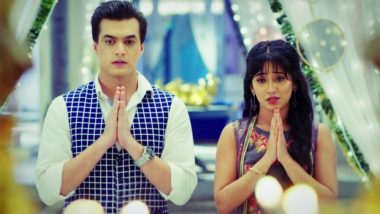 In the last episode of Yeh Rishta Kya Kehlata Hai, we saw Naira bumps into Kartik at the office while gathering information about Lisa’s boyfriend. Later, Kairav secretly writes Kartik’s name on her hand with Mehendi. Tonight’s episode starts with Vedika telling Naira (Shivangi Joshi) that tomorrow is her first Teej and Naira replies that it isn't hers and leaves from there. On the other hand, Devyani calls Suhasini and tells her that since it is Teej tomorrow, they should send Kairav and Naira to the Singhania as Naira will feel awkward and get emotional, to which Suhasini agrees. Later on, Suhasini goes to Kairav and tells him that he and Naira should go to the Singhania house as they are all missing him. Kairav says he wants to see the Teej festival and he will go after that. Naira sees that Kairav is not listening to anyone and gets disturbed. Yeh Rishta Kya Kehlata Hai September 6, 2019 Written Update Full Episode: Naira and Kartik Share Some Moments, Kairav Writes Kartik's Name On Naira's Hand!

Meanwhile, Kartik (Mohsin Khan) comes and says that they were all making fool of him and that they do not want him to go anywhere. Kairav becomes happy and goes. Kartik scolds Suhasini and asks her why are they hurting Kairav’s feelings and that he does not want to see tears in Kairav’s eyes. Kartik notices Naira and says that if anyone else wants to go they can go but Kairav will stay here only.

In the morning, the Teej rituals start, Suhasini tells everyone to have their food before they start their fasting. Kartik reminisces how he and Naira used to spend the festival and the good days they had. Kartik remembers that Naira had told him, that whatever happens, she will never break the fast rituals which she keeps for Kartik. Just then Naira comes running and opens the fridge to get an injection, Kartik asks her what happened, she tells him that the syringe needle is broken and she came to get another one, and that she needs to give Kairav the injection before he wakes up. Kartik and everyone see the mehendi on her hand and get upset. Yeh Rishta Kya Kehlata Hai September 5, 2019 Written Update Full Episode: Kairav Keeps Plotting To Get Naira And Kartik Close To Each Other!

Back in the room, Kartik comes and tells Naira that she should not worry and everything will be fine. Kartik sees Naira’s Mehendi and asks her if he remembers that today is Teej? They both reminisce the good times they had spent together. Kairav gets up and wishes both of them a happy Teej. Naira and Kartik thank him for the wishes. Kairav sees that Naira’s Mehendi color has come out nicely and is happy. Kairav asks Naira if she had fruits that are supposed to be consumed before the fast and asks her to have them before him. Naira eats to make Kairav happy.

On the other hand, Suhasini makes Vedika understands that she should not worry as it was Kairav who wrote Kartik's name on Naira's hand and that she isn't fasting for Kartik. Naira remembers how she used to fast during the last five years when Kartik was not there with her and says she will continue to do so. Later on, Naira and Kartik pray to God as Kairav's reports are due today. Kartik also tells her that he found out that the distributions of the company issued sim cards were under Akhil chachu and that he will question him whenever he returns.

In the next episode, Vedika wonders if Naira has kept the fast or not. Meanwhile, Kartik also wants to find out whether Naira kept the fast for him or not.

(The above story first appeared on LatestLY on Sep 09, 2019 06:15 PM IST. For more news and updates on politics, world, sports, entertainment and lifestyle, log on to our website latestly.com).