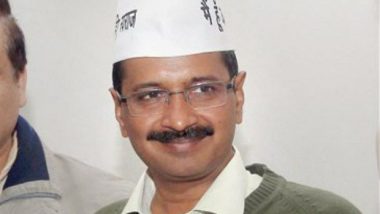 New Delhi, June 9: Delhi Chief Minister Arvind Kejriwal on Saturday once again attacked on PM Modi-led central government, accusing them of trying to frame him in something. In a series of tweets, the Delhi chief minister alleged that the Central Bureau of Investigation(CBI) and the Anti-Corruption Bureau (ACB) was picking files from the Delhi Jal Board (DJB) office on the orders received from centre since he was the minister-in-charge of the department. He further alleged that the move to check files with no specific reason was being made in a bid to frame him.

In September last year, Kejriwal took charge of water — the first portfolio taken by him after he became the chief minister in 2015. Kejriwal heads DJB in the national capital.

Meanwhile, in one of his tweets, he also urged Prime Minister Narendra Modi, LG Anil Baijal and the Bharatiya Janata Party (BJP) to not victimise the people of Delhi by paralysing all departments of the Aam Aadmi Party(AAP) led-Delhi government.

CBI n ACB started randomly picking files from DJB. No specific enquiry. Becoz now I am Min-in-charge, their effort is somehow frame me in something

He warned PM Modi to provide an explanation for seeking those file in another tweet. Also, he further claimed that he will make those files in public.

(The above story first appeared on LatestLY on Jun 09, 2018 07:02 PM IST. For more news and updates on politics, world, sports, entertainment and lifestyle, log on to our website latestly.com).