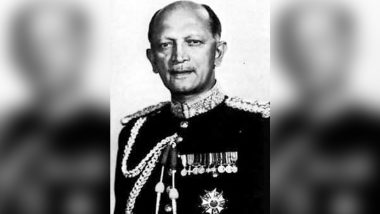 The Indian Army observes 122nd birth anniversary of Field Marshal Kodandera Madappa Cariappa on January 28, Thursday. Field Marshal KM Cariappa was the first Indian Commander-in-Chief of the Indian Army in Independent India. He took over the command of the Army from its British Commander in Chief, General Sir Roy Bucher. Cariappa was born on January 28, 1899, in Madikeri, Kodagu which is now part of Karnataka. Army Day 2021 Date, History & Significance: Know All About the Day Celebrated in Recognition of Field Marshal KM Cariappa.

Field Marshal Cariappa's father, Mandappa, worked with the revenue department. He had his formal education in Madikeri and pursued his college education from the Presidency College in Chennai. Cariappa joined the British Indian Army in 1919. He was commissioned into the 88th Carnatic Infantry at Bombay (now Mumbai) as Temporary Second Lieutenant.

On April 28, 1986, the Government of India conferred the rank of field marshal on Cariappa. He was the second Field Marshal of the Indian Army after Sam Manekshaw. Cariappa was married in March 1937, in Secunderabad, to Muthu Machia. The couple had a son and a daughter. Their son, KC Cariappa is also known as "Nanda", joined the Indian Air Force and rose to the rank of air marshal.

Cariappa's health began to deteriorate in 1991. He suffered from arthritis and heart problems. He breathed his last on May 15, 1993, at the Bangalore Command Hospital.

(The above story first appeared on LatestLY on Jan 28, 2021 04:58 PM IST. For more news and updates on politics, world, sports, entertainment and lifestyle, log on to our website latestly.com).