Gati to be Next Cyclone After Nisarga: What India Can Learn From Japanese Architect Shigeru Ban To Ensure Sustainable Architecture In Times of Calamities 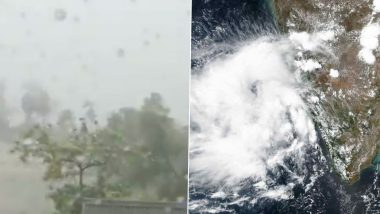 The rift with nature seems to be a never-ending process. With the terrifying Nisarga Cyclone becoming the talk of the town, a series of cyclone names have been released by the Meteorological Department of India, and the next one in the queue has been named Gati, which is on its way, ready to splash over the South Asian Seas. The exploitation of mangroves and unplanned urban development, leading to climate change, is considered to be the reason for the fast warming of the Arabian Sea, with the potential of being brutal enough in the near future. Taking into account the architectural perspectives, sustainable development techniques are crucial to be implemented, such as providing vistas of trees not only across the promenades but also in residential sectors with proper maintenance, which provide resistance to such devastating natural calamities like cyclones.

There is a remarkable increase in the sea surface temperatures that can make cyclones more outrageous, increase the rainfall intensity during the storms, resulting in rising sea levels. Hence, soaring skyscrapers are a matter of concern. In such areas with high alerts, temporary installation and shelter management techniques should be acted upon by converting schools, gymnasiums etc into shelter homes. Gati Cyclone to Be Next After Nisarga; How it Got Its Name and What It Means.

Japanese architect Shigeru Ban is a prominent personality, addressing this problem. For two decades, he and his Voluntary Architects’ Network have been travelling to disaster sites to provide shelter to victims. He and his team developed temporary shelters made with a framework of his signature paper tubes cladding invention for tenting. A modular wood wall frame is initially utilised to cover with plastic and gradually filled in with reclaimed brick rubble. The Japanese architect is futuristic about working on prefab housing that utilises fibreglass-reinforced plastic panels. He envisions building a plant to supply these components to victims of these unforeseen natural calamities.

Ban initially experimented with constructing buildings from paper tubes in 1986, and continued to test his innovative skills of form and material ever since. For Ban, it was always clear that good architecture must answer questions of utility and sustainability keeping in mind the aesthetics. Somewhat surprisingly, given the apparently fugitive nature of so many of his chosen materials, his buildings have proven longevity. Ban’s solution was to provide the victims not only shelter but a sense of individual space by building partitions from cardboard tubes and curtains.

(The above article has been contributed by Altamash Khan, who is an Architecture Student from Mumbai, and carries his personal views.)