Dry Days in Mumbai & Other Cities of Maharashtra in June 2018: Alcohol Shops and Bars Can Not Sell Liquor for Three Days Due to MLC Election on June 25

While everyone knows that the state has only nine dry days in a calendar, they are imposing this ban as per the rules under the Maharashtra Prohibition Act of 1949. 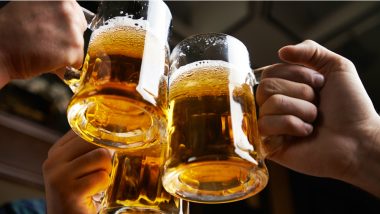 Mumbaikars are all set to face three days of ‘No Alcohol Day’ in the city on account of the Maharashtra Legislative Council elections on June 25 beginning from this Saturday onwards. It means alcohol shops and bars will not be allowed to sell liquor for three days. Yes, booze-lovers will face a tough time the coming weekend with as many as three dry days in Mumbai. Maharashtra, which has nine dry days in a calendar year has imposed an additional dry days imposing a prohibition on alcohol shops and bars to not sell liquor on June 23 (Saturday), June 24 (Sunday) and June 25 (Monday). It looks like the list of dry days is only increasing for alcohol lovers residing in Mumbai and might be interested in stocking up before the commencement of MLC elections. List of Dry Days in Mumbai 2018: Check Complete Calendar with Dates When Alcohol is Not For Sale in The City.

Dry days are specific days when alcohols are prohibited from being sold as these days are of religious or national significance. In the dry days' calendar released at the beginning of the New Year, Mumbaikars were aware of the one falling on June 15 as it marks the important festival of Muslims, Eid or Eid ul-Fitr. However, they are in for additional dry days at the end of the month. Not just Mumbai city, but also the Konkan coast will be facing three days of no-alcohol as the Maharashtra Legislative Council (MLC) election will be held on June 25. And because of it, reports suggest the city to go dry on liquor from Saturday onwards. Which are the Dry Days of 2018 in India: Check Complete List with Dates When Alcohol is Not For Sale.

According to PTI, biennial elections to the Maharashtra Legislative Council from two graduates' and two teachers' constituencies would be held on June 25, the Election Commission. Voting will be held on June 25 and the counting on June 28, it said. The term of MLCs from these four seats is ending on July 7. Of them, health minister and Shiv Sena leader Deepak Sawant represent the Mumbai graduates' constituency.

As per media reports, alcohol shops and bars in Mumbai, Palghar, Thane, Raigad, Ratnagiri and Sindhudurg districts will be imposed with a ban on sale and distribution of liquor for 48 hours before the polling day on June 25. Even on the election day, there will be no alcohol served until voting continues. A ban on the sale of alcohol will be in effect in the Nashik division where polling will be held for a single seat.

While everyone knows that the state has only nine dry days in a calendar, they are imposing this ban as per the rules under the Maharashtra Prohibition Act of 1949, which states the ban on sale and distribution of alcohol or any form of liquor can be prohibited on account of any general election, by-election to the Maharashtra Legislative Assembly. “The ban will remain in effect for 48 hours, ending with the hours fixed for the conclusion of the polling,” is written as per rules. Well, it is in writing, and it means you need to stock it up if you do not wish to experience ‘dry days’ blues!

(The above story first appeared on LatestLY on Jun 22, 2018 07:46 PM IST. For more news and updates on politics, world, sports, entertainment and lifestyle, log on to our website latestly.com).