India on U.S’s Iran Sanctions: We Will Only Follow UN Guidelines Not Those Imposed Unilaterally By Other Countries 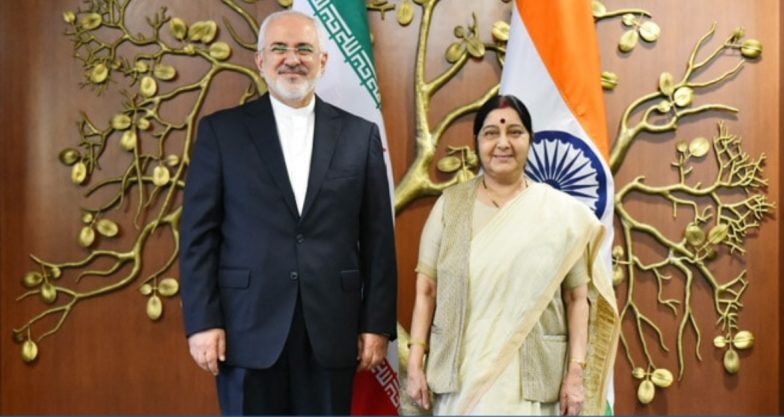 India said on Monday it abides by sanctions imposed by the United Nations but not those imposed unilaterally by any other country, such as those announced by the United States against Iran. This statement comes after India’s External Affairs Minister Sushma Swaraj held wide-ranging talks with her Iranian counterpart Javad Zarif during his one-day visit to the country.

Indian foreign minister Sushma Swaraj said New Delhi's position was independent of any other country. "India follows only UN sanctions, and not unilateral sanctions by any country," she said at a news conference following the bilateral talks.

Zarif's day-long visit here is part of Tehran's efforts to reach out to major world powers after the U.S. pulled out from the landmark nuclear deal of 2015 under which Tehran had agreed to stop its sensitive nuclear activities in return for the lifting of crippling economic sanctions. Sources said Zarif sought India's support to the nuclear deal during his talks with Swaraj.

"FM Zarif briefed about the discussions that Iran has undertaken with parties to the Joint Comprehensive Plan of Action (JCPoA) following the US decision to withdraw from the agreement," the Ministry of External Affairs (MEA) said in a statement. It said Swaraj conveyed that all parties to the agreement should engage constructively for peaceful resolution of issues that have arisen with respect to it. China, Russia and European countries – UK, France and Germany who are party to the deal are working to salvage it after U.S.’s decision to pull out.

Sources said India’s import of oil with Iran and implementation of the Chabahar port project also figured prominently in the talks. Iran is India's third largest oil supplier and there were apprehensions about the possible impact of the U.S. decision on India's oil imports. The MEA said Swaraj and Zarif discussed bilateral, regional and international issues of mutual interest. "The two sides positively assessed the implementation of decisions taken during the visit of President Rouhani to India. These included bilateral cooperation in the areas of connectivity, energy, trade and promotion of people to people contacts," it said.

The MEA said the other members of the delegation accompanying Zarif had separate meetings with their counterparts where they discussed measures for practical cooperation between the two sides.

The Iranian Foreign Minister visited China, Russia and some European countries in the last three weeks after President Donald Trump announced Washington's withdrawal from the nuclear deal. Iran had struck the Joint Comprehensive Plan of Action (JCPoA) with the US, the UK, Russia, China, France and Germany after years of negotiations.

During Rouhani's visit, both sides signed nine agreements including one on handing over Chabahar port's operation to India for 18 months. According to the MEA, India-Iran bilateral trade during the 2016-17 fiscal was USD 12.89 billion. India imported USD 10.5 billion worth of goods, mainly crude oil, and exported commodities worth USD 2.4 billion. (With Agency inputs)