Jammu and Kashmir: Temperature Falls to Minus 3.2 Degrees Celsius in Srinagar, Likely to Drop Further 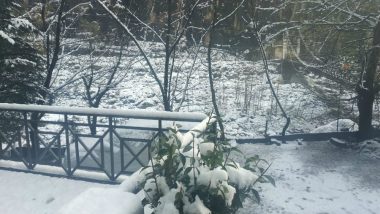 Srinagar, December 4: Minimum temperatures continued falling across Jammu and Kashmir on Tuesday with Srinagar recording its coldest night of the season so far at minus 3.2 degrees Celsius, a weather office said. The minimum temperatures were likely to drop further due to clear night sky as mainly dry weather was expected in the next seven days in the state, he said.

"Drass town in Kargil district which is the second coldest inhabited place in the world had recorded minus 14 as the minimum temperature on Monday," he added.

(The above story first appeared on LatestLY on Dec 04, 2018 11:39 AM IST. For more news and updates on politics, world, sports, entertainment and lifestyle, log on to our website latestly.com).