Sixteen naxals were killed in an encounter with police in Etapalli's Boriya forest area in Gadchiroli district yesterday by commandos of Maharashtra Police. 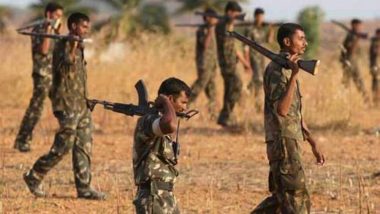 Nagpur, April 23: Sixteen naxals were killed in an encounter in Etapalli's Boriya forest area in Gadchiroli district yesterday by commandos of Maharashtra Police. Large amount of weapons were also seized. The Gadchiroli Police, in a press release, said the deceased included some high-ranking ultras. The press also release mentioned the names of some slain naxals, including Shrinu alias Shrikanth (51), a native of Challgari in Telangana, who was deputy commander. Another deceased ultra has been identified as Deepa alias Aamsubai, a native of Adilabad, who was involved in 82 cases of serious nature. Sainath alias Dolesh Madhi Atram, a resident of Gattepalli in Gadchiroli, who was a division committee member and Permili in charge was also among those killed.

According to DIG (Gadchiroli) Ankush Shinde, The encounter broke out around 10 am at Kasansur forest in Bhamragad between the ultras and a joint team of security forces comprising C60 commandos of the Gadchiroli police, and personnel of the 9th Battalion of the CRPF. It lasted for 90 minutes. The DIG confirmed to PTI that 16 naxalites were killed in the operation. Director General of Police Satish Mathur congratulated the C-60 team which participated in the encounter. Mathur told PTI, “This is a major operation against Naxalites in recent times.”

On April 20, a Central Reserve Police Force (CRPF) jawan was kiled in an encounter with Maoists in Sukma district of Chhattisgarh. Earlier this month, five naxalites were killed in an encounter with security forces in Serendaag jungle of Jharkhand's Latehar district.  On March 2, 10 naxalites were killed in an exchange of fire with the police on the Chhattisgarh-Telangana border. A commando of the anti-Naxal Greyhounds was also martyred in the operation.

(The above story first appeared on LatestLY on Apr 23, 2018 09:11 AM IST. For more news and updates on politics, world, sports, entertainment and lifestyle, log on to our website latestly.com).