Lok Sabha Elections 2019: Couples Fly in from Gabon in Africa, Germany to Vote

Khopkar, whose name is registered as a voter in Pune's Baramati Lok Sabha seat, headed there while Prajakta rushed to Vadodara in neighbouring Gujarat to cast her vote. 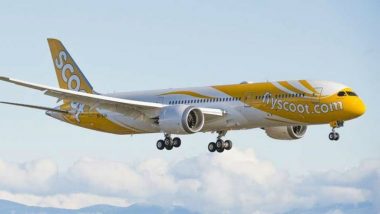 Mumbai, April 23: A non-resident couple Tuesday set an example for voters nationwide by flying in from Gabon in Africa to exercise their franchise in Pune and Vadodara respectively. Vihang Khopkar (35), a professional employed with a private firm in Gabon, and his wife Prajakta (34) flew all the way to Mumbai on Sunday to ensure they could vote for the Lok Sabha polls on Tuesday. Khopkar, whose name is registered as a voter in Pune's Baramati Lok Sabha seat, headed there while Prajakta rushed to Vadodara in neighbouring Gujarat to cast her vote. Daman And Diu Lok Sabha Elections 2019: Phase 3 Voting Ends in Single Parliamentary Constituency of Union Territory; 65.34% Voter Turnout Recorded.

"Today we voted and we are immensely happy that we did our duty. I had adjusted my leave in such a way that we could both reach here for the polls. We will be going back to Gabon in the next 4-5 days," Vihang told PTI.

Matching them in commitment to the country's primary democratic exercise were Vijay and Ashwini Deshpande, originally from Kothrud, who came from Germany to vote in the Pune Lok Sabha constituency.

Among others, octogenarian Kusum Subrao Babar, a resident of Khanapur tehsil in Sangli, came to vote accompanied by hospital staff tending to her artificial oxygen supply apparatus. Lok Sabha Elections 2019 Phase 3: 46.28 Per Cent Voter Turnout in Maharashtra Till 3 PM.

A 96-year-old World War II veteran arrived to vote in Pune in a wheelchair.

An Election Commission official said its PWD (people with disabilities) app had seen over two lakh people register, many of them using the free transport facility provided to and from the polling booths by authorities. Select poll booths in every Lok Sabha constituency were decorated so to enthuse voters and increase polling percentage.