The toll in the Mumbai building crash has risen to 10 and at least 13 others, including a woman, were injured, the BMC Disaster Control said on Tuesday. 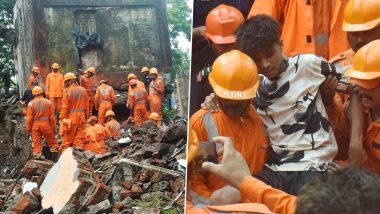 Mumbai, June 28:  The toll in the Mumbai building crash has risen to 10 and at least 13 others, including a woman, were injured, the BMC Disaster Control said on Tuesday.

According to officials, the entire wing of the ground-plus-three floor Naik Nagar Building in Kurla east suburb of northeast Mumbai crashed minutes before midnight, trapping many persons living there. Mumbai: 30-Year-Old Man Steals Scooter As Return Gift for Friend Who Helped Him Get Bail, Arrested

Earlier this afternoon, the rescuers had extricated 17 (all adult males) persons trapped under the debris, and recovered four bodies.

As work continues amid intermittent showers to clear the mound of rubble, six more bodies were recovered and another 6 injured survivors were pulled out and rushed to hospital.

The rescue teams of Mumbai Fire Brigade and other agencies besides local volunteers, who joined the rescue efforts there have expressed a potential risk to the adjoining second wing of the same building which could also collapse anytime.

Among the 13 injured, including a woman, four are admitted to hospital and the remaining 9 have been discharged after treatment, as a hunt continues to extricate others feared buried under the debris.

(The above story first appeared on LatestLY on Jun 28, 2022 05:31 PM IST. For more news and updates on politics, world, sports, entertainment and lifestyle, log on to our website latestly.com).