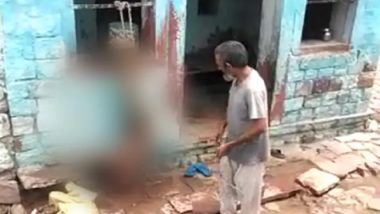 Agra, August 9: In a horrific incident, a father has been caught on camera thrashing his son after hanging him upside down with a rope outside their house. After a video of the beating went viral on social media, police arrested the man on Saturday. The incident took place in Uttar Pradesh's Agra. According to police officer Ravi Kumar, the father beat his son because he had done something against his will. Security Guard Arrested for Thrashing Elderly Woman in Prayagraj.

In the 52-second disturbing video clip, the young boy is seen tied upside down with a rope hanging at the window of a house. The teenager is seen crying as the man hits him with a rope. Several people are seen standing around and one man is heard saying in the video: "He is a child, let him be". But, the father shows no mercy and continued yelling at his son who is crying in pain. Ghaziabad Shocker: Journalist Assaulted, Shot At For Protesting Against Eve-Teasing, Police Station In-Charge Suspended (Watch Video).

"We have taken note of the video. The incident happened at around 6-7 pm yesterday (Saturday). The man was upset because of something that the child did," Ravi Kumar told NDTV. "About three-four days back, he had a fight with his wife, who then went to her sister's home. He has three children. The one in the video is his eldest son. We are questioning him... he hasn't admitted so far that he was drunk," the officer added.

This is the second such disturbing incident which has happened in Uttar Pradesh. Recently, a security guard, Sanjay Mishra, was arrested in Prayagraj after a video of him mercilessly beating an elderly homeless woman had surfaced on social media.

(The above story first appeared on LatestLY on Aug 09, 2020 01:17 PM IST. For more news and updates on politics, world, sports, entertainment and lifestyle, log on to our website latestly.com).