Speaker of the Andhra Pradesh Legislative Assembly, Tammineni Seetaram, adjourned the House sine die after passing the Appropriation Bill 2022 and Appropriation (No. 2) Bill 2022 by voice vote here on Friday. 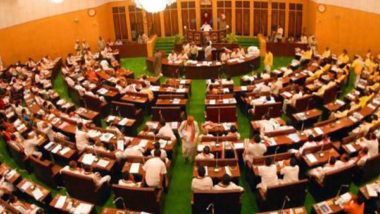 The session witnessed stormy scenes between the ruling YSRCP and the opposition TDP, with the latter attacking the ruling party over the hooch deaths in Jangareddygudem and its MLAs being repeatedly suspended during the session.

Meanwhile, West Bengal Chief Minister Mamata Banerjee's recent statement that the TDP had purchased Pegasus spyware during its tenure at the helm provided YSRCP the ammunition. The Assembly had on Monday unanimously decided to constitute a House committee on the Pegasus row in the wake of the recent statement by Banerjee. Birbhum Violence: BJP MP Roopa Ganguly Breaks Down in Rajya Sabha (Watch Video).

In the ongoing Budget session, which commenced on March 7, the House sat for 12 days from March 8 to 25 and passed 11 Bills. The session also saw oral replies being given to 96 questions, while 30 star questions and three unstarred questions recieved answers. Andhra Pradesh: Two Arrested for Bid To Sexually Assault Lithuanian National in Nellore.

The Speaker said that the Assembly worked for 61 hours and 45 minutes, where one report was presented and five short discussions were held, besides 103 speeches made by the members.

(The above story first appeared on LatestLY on Mar 25, 2022 05:41 PM IST. For more news and updates on politics, world, sports, entertainment and lifestyle, log on to our website latestly.com).