A total of 264 cadets of Indian Navy, Indian Coast Guard and 10 international cadets on Saturday passed out from the Indian Naval Academy (INA). 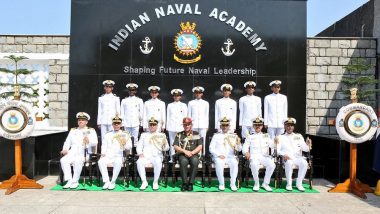 Ezhimala, May 26: A total of 264 cadets of Indian Navy, Indian Coast Guard and 10 international cadets on Saturday passed out from the Indian Naval Academy (INA). The passing out parade was reviewed by Chief of the Army Staff General Bipin Rawat. Medals were awarded to meritorious midshipmen and cadets. INA Commandant Vice Admiral R.B. Pandit and Director of the Indian Institute of Science, Bengaluru, Anurag Kumar were also present at the POP. Indian Navy Entrance Test INET Introduced for Graduates: Know Eligibility, Selection Process and All About the Exam to Be Held in September 2019

The President’s Gold M.edal for the INA B.Tech. course was awarded to Midshipman Killamsetty Vikash. The Chief of the Naval Staff (CNS) Gold Medal for the NOC (Extended) was awarded to cadet Siddharth Sankar. Cadet Kreeshma R received the Zamorin Trophy for the best women cadet. This trophy is instituted for the first time this year. Indian Navy Confirms Re-Deployment of Nuclear Submarine, Aircraft Carrier in Arabian Sea Post Pulwama Attack.

The passing out batch of Sri Lanka trainees from the INA has the distinction to be the first batch of foreign trainees to complete the four years B.Tech curriculum ever since it is institution. After the award ceremony, family members of the cadets shipped the Naval and Coast Guard epaulettes, known as ‘Stripes’, on their shoulders

(The above story first appeared on LatestLY on May 26, 2019 04:33 PM IST. For more news and updates on politics, world, sports, entertainment and lifestyle, log on to our website latestly.com).