Ashok Lavasa on Tuesday resigned as Election Commissioner and he would soon be joining the Asian Development Bank as vice president, according to an ANI report. 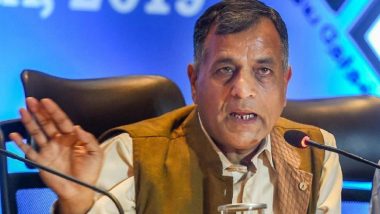 New Delhi, August 19: Ashok Lavasa on Tuesday resigned as Election Commissioner and he would soon be joining the Asian Development Bank as vice president, according to an ANI report.  Lavasa was next in line to head the EC. He reportedly sent his resignation to Rashtrapati Bhavan and has requested to be relieved on August 31.

Lavasa, 62, was appointed Election Commissioner in January 2018 and had two years left in his tenure. Lavasa made headlines in 2019 after a dissenting opinion on a panel's ruling of complaints against Prime Minister Narendra Modi and Amit Shah during the Lok Sabha election campaign. After Election Commissioner Ashok Lavasa's Wife, Sister And Son Also Under I-T Department Radar.

He would be joining the Philippines-based ADB sometime in September. ADB authorities had announced on July 15 that Lavasa has been appointed as the vice-president for private sector operations and public-private partnerships (PPP). Lavasa has a business degree from Australia and a degree in Defence and Strategic Studies from the University of Madras.

Lavasa had several stints in various government departments, including as secretary in the Union finance ministry. As CEC, Lavasa would have overseen elections in West Bengal, Manipur, Goa, Punjab, Uttar Pradesh, and Uttarakhand.

(The above story first appeared on LatestLY on Aug 19, 2020 08:10 AM IST. For more news and updates on politics, world, sports, entertainment and lifestyle, log on to our website latestly.com).