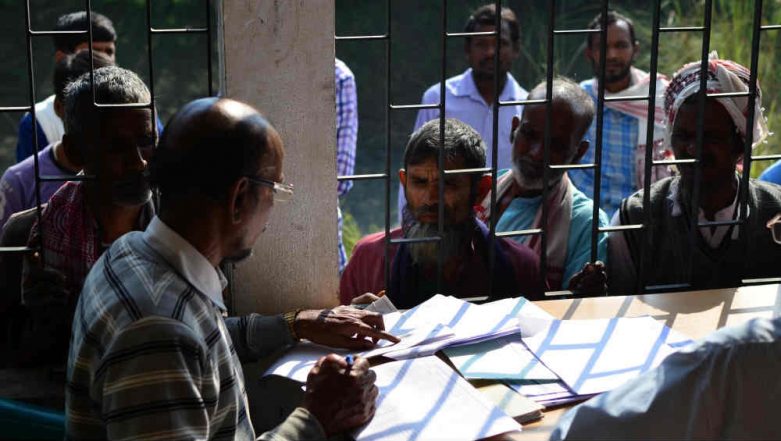 Guwahati, September 2: The Ministry of Home Affairs (MHA) on Monday announced the formation of 200 additional foreign tribunals (FTs) across Assam to provide judicial remedy to over 19 lakh people who have been left out of the National Register of Citizens (NRC). The excluded persons have a time period of 120 days, roughly four months from the date of final NRC list publication, to file their pleas before the FTs. 'Excluded People Won't Be Detained Until All Legal Remedies Exhaust', Says MEA.

The final NRC list was published on August 31, and ended up excluding 19,06,657 applicants from the citizenship registry. In a bid to assuage concerns, the BJP-led government in the state assured those left out that they would not face action until all legal remedies are exhausted.

"Our stand is clear. No genuine person should be left out irrespective of their religion, and no illegal immigrant should be included. The foreign tribunals have been set up to provide judicial remedy," said State Finance Minister Himanta Biswa Sarma.

Update on FTs by ANI:

Adequate Judicial process available for affected persons to appeal to Foreigners Tribunal within 120 days from Aug 31. To facilitate appeal, 200 new FTs to be functional from today, in addition to 100 already existing. pic.twitter.com/L5g7OLD5Wq

"Adequate judicial process available for affected persons to appeal to Foreigners Tribunal within 120 days from August 31. To facilitate appeal, 200 new FTs to be functional from today, in addition to 100 already existing," a spokesperson of the Ministry of Home Affairs (MHA) said.

Meanwhile, the NRC exercise has left none among the major stakeholders satisfied, with the powerful All Assam Students Union (AASU) saying that it will move the Supreme Court again, alleging that several of the "illegal immigrants" in border districts have entered into the final list.

The All Assam Minority Students Union (AAMSU), along with the state unit of Congress, has alleged the exclusion of several genuine Indian citizens. "We will appeal to the Supreme Court again. We will also provide legal help to all excluded genuine Indians," said AAMSU advisor Azizur Rahman.