According to a tweet by ANI, the tragic incident happened near Karmad. Chief Public Relations Officer (CPRO) of South Central Railway (SCR) informed that RPF and local police are reaching spot to asses the situation. The incident took place around 5.15 am on Friday. 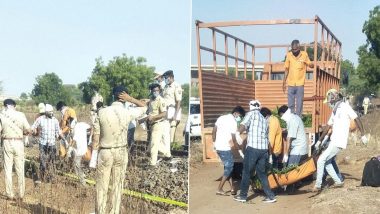 Karmad, May 8: In a tragic incident, an empty rake of goods wagon ran over 16 mingrant labourers who were sleeping on the rail tracks in Maharashtra's  Aurangabad district. According to a tweet by ANI, the tragic incident happened near Karmad on Friday morning. According to details by a railway official, the freight train ran over 16 migrant labourers between Jalna and Aurangabad of Nanded Divison of South Central Railway (SCR). As many as 5 people have been injured and have been shifted to Aurangabad civil hospital. Chief Public Relations Officer (CPRO) of South Central Railway (SCR) informed that RPF and local police are reaching at the spot to asses the situation. The incident took place around 5.15 am on Friday.

According to a tweet by ANI,  Mokshada Patil, SP Aurangabad said as many as 16 migrant workers have been killed after coming under the goods train on Friday. An official at the Karmad police station said that the labourers who were walking to Bhusawal from Jalna, were returning to Madhya Pradesh. Reports inform that the workers had been walking along the rail tracks and slept on the rail tracks due to exhaustion. Aurangabad Train Accident: Maharashtra Govt Announces Rs 5 Lakhs Ex-Gratia Each to Families of the Deceased Migrant Labourers.

At around 5:15 am, unfortunately a freight train ran over some people which lead to the death of 16 labourers. We are looking in to the matter: Mokshada Patil, SP Aurangabad #Maharashtra pic.twitter.com/GJaavisRv4

The Indian Railways, in its statement said that during early hours on Friday, after seeing some labourers on track, loco pilot of goods train tried to stop train but eventually hit them between Badnapur and Karmad stations in Parbhani-Manmad section. The injured ones have been taken to Aurangabad Civil Hospital and an inquiry has been ordered into the matter.

India is currently under the third phase of lockdown in the wake of the COVID-19 threat. The railway is only running freight and special parcel trains to ensure supply of essential items during the lockdown. The national transporter has suspended the regular services of the passenger, mail and express trains until further notice.

Earlier this month, the Indian Railways decided to run 'Shramik Special' trains to move the stranded labourers, pilgrims, tourists and students from various states to their native land. The decision was taken by the railways following demands of the state governments to run special trains.

(The above story first appeared on LatestLY on May 08, 2020 08:33 AM IST. For more news and updates on politics, world, sports, entertainment and lifestyle, log on to our website latestly.com).