He won the first prize in the Bhagavad Gita contest organised by Iskon near Hebbal which had 400 participants from 14 schools. 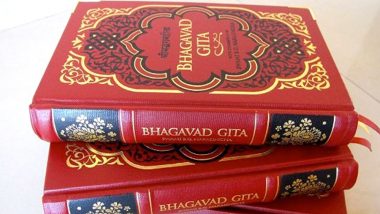 A teenage boy from Bangalore has won a Bhagavad Gita contest. But the reason why it’s making headlines is that he is not a Hindu but a Muslim. In a world, where we keep fighting over religion, creating disturbance in the already disrupted society, the young boy’s win stood as a significant inspiration. Identified as Shaikh Mohiuddin, the Muslim teenager aced the verses of the Hindu scripture, the Bhagavad Gita. He won the first prize in a contest organised by Iskon near Hebbal, which had 400 participants from 14 schools. Timeless Lessons by Lord Krishna from the Bhagavad Gita.

As reported by TOI, the fourteen-year-old is a class 9 student studying at Subhash Memorial English School. He answered all the 41 multiple-choice questions correctly. Surprised with his intellect? The young boy had read the Quran long ago, and after going through the verses of the Bhagavad Gita, he understood the larger message. Thanking his grandmother Afsiya Khanum, the young boy said, “She helped me understand the Gita. I had read the Quran long ago and after reading the Gita, I felt the larger message in both is the same — upholding of human values.” He has begun to read the Bible as well.

The fourteen-year-old is the youngest son of Shaikh Salahuddin and Sabhiya Mohammad, residents of Balaji Layout in Hebbal. According to his mother Sabhiya, the teenager started asking questions about the Gita and religions while going through a general knowledge book when he was 11 years old. She said, “I bought him a copy of the Gita and he started to read it with the help of his grandmother. Within six months, he managed to read and understand the entire scripture.”

(The above story first appeared on LatestLY on Oct 05, 2018 11:11 AM IST. For more news and updates on politics, world, sports, entertainment and lifestyle, log on to our website latestly.com).