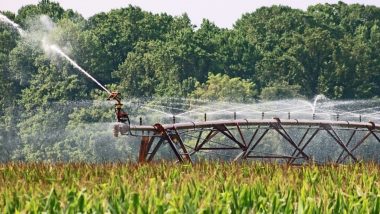 Bhutan, June 26: Bhutan issued a clarification and stated that media reports alleging that they have stopped the supply of irrigation water to areas in Assam are "totally baseless" and a "deliberate attempt by vested interests to cause misunderstanding between friendly people of Bhutan & Assam."

Assam Chief Secy Kumar Sanjay Krishna talking on the issue said that irrigation water comes to Assam from hills of Bhutan, and there was boulder which stopped the flow. "We talked to Bhutan & they immediately cleared it. There's no dispute & to say that they stopped the water to Assam is wrong," he said. India Reacts to Nepal Parliament's Approval of New Map, Calls it 'Artificial Enlargement', Violation of Understanding to Hold Talks.

Reports emerged on Thursday claiming that Bhutan has stopped the release of channel water that’s used for irrigation in bordering Assam, thus affecting thousands of farmers from around 25 villages in the state.

Here's the clarification issued by Bhutan:

Bhutan issues clarification, states that media reports alleging that they (Bhutan) have stopped the supply of irrigation water to areas in Assam "are totally baseless" & "deliberate attempt by vested interests to cause misunderstanding between friendly people of Bhutan & Assam." pic.twitter.com/PQ4F2hcH40

There were also reports that several farmers of Baksa district under the banner of Kalipur-Bogajuli-Kalanadi Anchalik Dong Bandh Samiti took part in the demonstration and demanded the Bhutan governments to release the required water as farmers from these villages are surviving on water released by Bhutan government.

(The above story first appeared on LatestLY on Jun 26, 2020 01:03 PM IST. For more news and updates on politics, world, sports, entertainment and lifestyle, log on to our website latestly.com).