With 657 CCTV cameras per square kilometre, Tamil Nadu capital Chennai has become the top city in the world in terms of surveillance, according to a recent report. 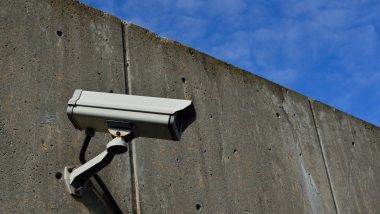 Chennai, January 4: With 657 CCTV cameras per square kilometre, Tamil Nadu capital Chennai has become the top city in the world in terms of surveillance, according to a recent report published in South Asia Journal. The report is based on studies conducted on 130 cities worldwide. It concluded that Chennai has the maximum CCTV coverage per square kilometre and per 1,000 population. Telangana's capital Hyderabad is second on the list. Subashree Road Accident: CCTV Captures Moment When AIADMK Banner Fell on Chennai Techie, Leaving Her Dead; Watch Horrifying Video.

"China and India are the countries with the highest densities of CCTV surveillance cameras in urban areas," the report said. Chennai Police Commissioner Mahesh Kumar Aggarwal acknowledged how the presence of CCTV cameras help the department in maintaining law and order and solving crimes. "We are hoping to extend the coverage," he told The Hindu. CCTV installation drive gained momentum during the tenure of Aggarwal’s predecessor AK Viswanathan.

"With the advent of CCTV devices, policing has changed entirely. In any crime investigation, the CCTV is the first instrument and handy tool to crack the case. Detection in criminal cases has increased," Viswanathan, who is now Additional Director-General of Police, Operations, was quoted as saying.

(The above story first appeared on LatestLY on Jan 04, 2021 11:23 AM IST. For more news and updates on politics, world, sports, entertainment and lifestyle, log on to our website latestly.com).