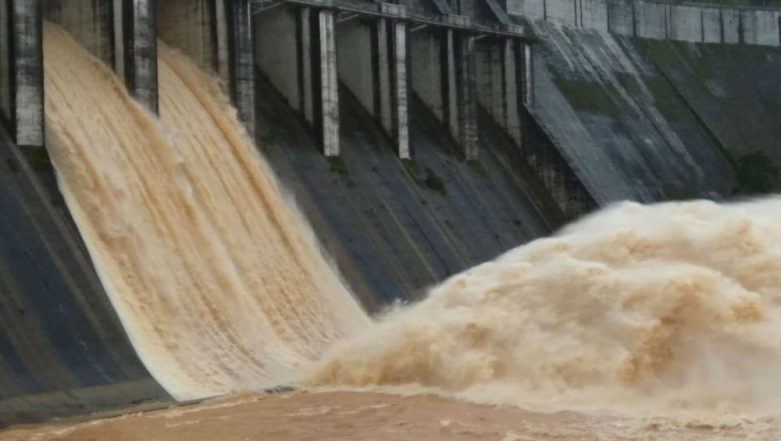 Puri, Sep 21: After cyclonic storm 'Daye' caused heavy rainfall in several parts of Odisha, two shutters of Upper Kolab dam in Koraput have been opened following a rise in the water level. The cyclonic storm crossed the coast near Gopalpur in Odisha early on Friday. According to the latest update by ANI, the cyclonic storm 'Daye' will continue to move west-northwestwards and weaken gradually into depression during next 12 hrs. The developing cyclone is expected to bring heavy to moderate showers in Vidarbha and several areas of Maharashtra.

Spl Relief Commissioner, Odisha informed that except for Malkangiri, the situation is normal in all other districts. He said Malkangiri has received very heavy rainfall in last 24 hours, two villages & colonies have been affected while a landslide was reported from Chitrakonda area. He said the water level in all major rivers is below the danger level. Meanwhile, Chief Minister Naveen Patnaik has sanctioned gratuitous relief of Rs 60 a day per person and Rs 45/per day for children below 12 for seven days.

The system triggered incessant rains accompanied by high-velocity wind in several parts of the state. Danger signs with signal number 3, which warns of surface winds clocking 40-50 kmph, have been hoisted at all ports of Odisha, officials said. The sea will be rough over Odisha coasts during next 12 hours.

Parts of Malkangiri town in Odisha flooded after heavy rain caused by Daye:

#WATCH: Parts of Malkangiri town in Odisha have been flooded following heavy rainfall caused due to cyclonic storm #Daye. pic.twitter.com/4uroc3kEtW

Reports inform that the cyclonic system lay centred over south Odisha, about 40 km west-northwest of Gopalpur and about 150 km east-southeast of Bhawanipatna. Director, Meteorological Centre, Bhubaneswar, H R Biswas informed that the cyclonic storm over northwest Bay of Bengal moved west-northwestward with a speed of about 23 kmph and crossed south Odisha and adjoining Andhra Pradesh coast close to Gopalpur in the early hours of Friday. Cyclone Warning Centre Likely to be Set Up in Thiruvananthapuram, Chennai, Visakhapatnam, Bhubaneswar, Kolkata, Ahmedabad & Mumbai.

The India Meteorological Department (IMD) has also predicted damage to houses, roads, crops and minor damage to power and communication lines in Gajapati, Ganjam, Khordha, Nayagarh and Puri districts at the time of landfall.

According to a report by PTI, the impact of the cyclonic storm was felt more in Gajapati, Ganjam, Khordha, Nayagarh and Puri districts while heavy to very heavy rainfall is also likely to occur at some places including Balangir, Bararh, Jharsuguda, Sambalpur, Sundargarh, Keonjhar and Mayurbhanj districts till the morning of Saturday.