Cyclone Nivar is very likely to cross Tamil Nadu and Puducherry coasts between Karaikal and Mamallapuram on November 25 evening as a severe cyclonic storm with a wind speed of 100-110 kmph gusting to 120 kmph. Check Real-time Status on Windy.com. 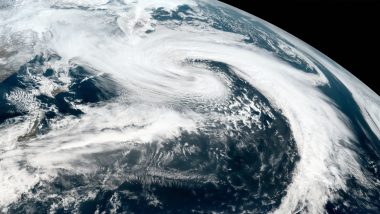 Chennai, November 24: The Coastal parts of Chennai are on alert ahead of Cyclone Nivar. According to IMD, Cyclone Nivar is very likely to cross Tamil Nadu and Puducherry coasts between Karaikal and Mamallapuram on November 25 evening as a severe cyclonic storm with a wind speed of 100-110 kmph gusting to 120 kmph.

The cyclonic storm is expected to bring in heavy to extremely heavy rains in southern states of India during the landfall. You can track the Cyclone Nivar Path Live on Windy.com. Cyclone Nivar Live Tracker Map: Track Real-time Path of Cyclonic Storm Which Is Likely to Make Landfall Between Tamil Nadu and Puducherry on November 25.

The Bay of Bengal will see its second Severe Cyclone of the year after Super Cyclone Amphan formed in May. According to reports, after cyclone Gaja in 2018, this will be the second cyclone to cross Tamil Nadu in the last two years.

Details About the intensity:

The depression will intensify into a cyclone sometime on Tuesday. At this stage, the wind speed will range between 70 to 80 km/hr gusting to 90km/hr. By Wednesday, the cyclone will further gain strength into a Severe Cyclone category (90 to 100 km/hr gusting to 110 km/hr). Cyclone Nivar Latest Updates, Emergency Contacts & 'Stay Safe' Best Wishes Take over Twitter as Chennai Braces for Another Storm.

The NDMA shared a list of dos and don'ts to be followed to stay safe when the cyclone hits. For e.g, before the cyclone people have been advised to ignore rumours, stay calm, keep their mobile phone charged. Also, prepare an emergency kit with essential items which may come in handy if required. During and after the cyclone, people have been advised to switch off the electrical mains, gas supply. The state has issued alerts informing fishermen to return to the coast.

(The above story first appeared on LatestLY on Nov 24, 2020 10:54 AM IST. For more news and updates on politics, world, sports, entertainment and lifestyle, log on to our website latestly.com).