Delhi Environment Minister Gopal Rai conducted an inspection visit of the Bhalswa dumping sites, in an effort to overview the following of norms under the anti-dust campaign in Delhi. 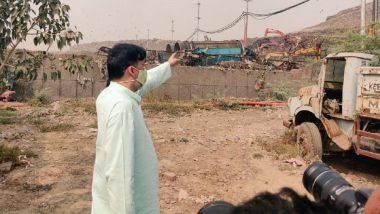 New Delhi, October 13: Delhi Environment Minister Gopal Rai conducted an inspection visit of the Bhalswa dumping sites, in an effort to overview the following of norms under the anti-dust campaign in Delhi, where he found a large scale violation of the guidelines issued by the Delhi government. Expressing anguish on the situation, he said that all the departments should remain vigilant in dealing with the growing pollution crisis within Delhi, but it is the negligence of the MCD that is responsible for the flouting of norms on the sites. Dust Pollution: All Government Agencies And Individuals Should Follow Guidelines Issued by Delhi Govt at Construction Sites, Says Gopal Rai.

He said, "We have directed the Delhi Pollution Control Committee (DPCC) to take stringent action. We have directed MCD to increase water tankers at sites. The MCD will also be fined for violation of government guidelines. The Delhi government has issued detailed guidelines on construction work and all authorities will have to adhere to them." The North MCD has been levied a fine of Rs. 20 lakhs for negligence of duty. Odd-Even Scheme in Delhi Soon? Here's What Environment Minister Gopal Rai Has to Say.

Delhi Environment Minister Gopal Rai inspected the Bhalswa dumping site today. In the meantime, he told the media that there is negligence on the dumping site. "The incompetence of certain departments in tackling the problem of pollution in Delhi is visible. We have directed the DPCC to take adequate and strict action in the matter."

Gopal Rai said, "We have directed the departments to increase the count of tankers in the area, and strict action will be taken along with imposing a penalty for the violation of rules. The spraying of water is not regularly done in the area, which is why strict action will be taken against the authorities responsible for ensuring this. We have further directed that the tanker count should be doubled and the water should be sprayed properly and regularly so that the dust in the air can be prevented.

We have directed proper sprinkling of water in all the four directions. Directions have been issued to various departments to address issues like these all over Delhi. Instructions have been issued within the entire Delhi that all the concerned departments should take action immediately wherever there are such complaints. The authorities responsible for the construction projects in Delhi will have to strictly adhere to the guidelines to ensure minimum pollution levels, or strict actions will be taken against them."

Speaking on the occasion, Gopal Rai said that the government has launched an anti-dust campaign to check pollution caused by dust in the air in Delhi. Under the campaign, the Government has issued necessary guidelines and stringent action will be taken in case of violations.