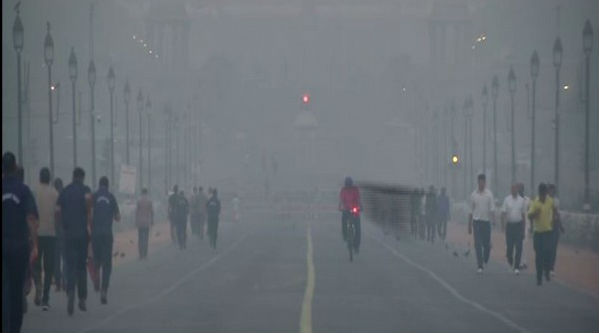 New Delhi, December 11: There seems to be no respite as the air quality in the national capital continues to deteriorate.  The Air Quality Index (AQI) in the Loni area was at 456 in the 'severe' category. The overall AQI in Delhi was at 366, thus falling under the Hazardous category as the cold weather and calm winds allowed the accumulation of pollutants. The AQI was at 403 in the 'severe' category, in Patparganj and at 341 in 'very poor' category in the area around India Gate.

An AQI of 169 was recorded in Gurugram, thus falling under the 'Unhealthy' category. The week started with the air quality dipping to  'very poor' levels. The moderate fog at isolated places in the national capital added to the woes people in the national capital struggling for fresh air. Delhi Air Pollution: Air Quality Dips & Turns Severe in Ghaziabad Area, Moderate Fog Around Many Places Lowers Visibility.

The Apex Court on Monday partially relaxed the ban on construction activities in Delhi-NCR and has allowed construction from 6 am to 6 pm. The construction activities will continue to remain banned during the night. The ban was imposed in the national capital after the air quality turned severe in the month of November, and a health emergency was declared. However, it was observed that there was not much of a difference, as the air continued to remain toxic.