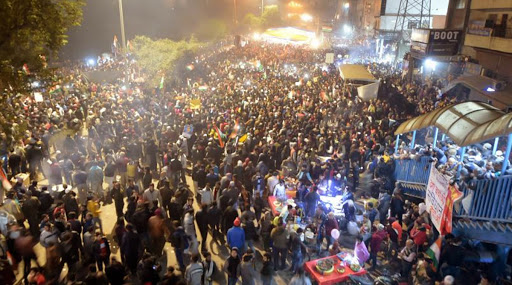 New Delhi, March 1: The Delhi Police on Sunday made a heavy deployment of security personnel in southeast Delhi's Shaheen Bagh area, where several women have been leading a protest on the road against the new citizenship law for more than two months, as a precautionary measure, officials said. Section 144 too was imposed in the area, they said.

The police deployment has come after a fringe right-wing group, Hindu Sena, gave a call to clear the Shaheen Bagh road on March 1. However on Saturday, following police intervention, the group called off their proposed protest against the anti-CAA agitation in Shaheen Bagh. Shaheen Bagh Protesters to Celebrate Kashmiri Pandit Exodus on January 19? Know Truth Behind Viral Twitter Message.

"The proposed protest call was cancelled with timely intervention. But as a precautionary measure, we have made heavy police deployment here," Deputy Commissioner of Police (Southeast) R P Meena said. Twelve companies, including two of female forces, have been deployed in Shaheen Bagh, 100 men each from four police districts have also been deployed along with the local police, the official said.

The Hindu Sena said in a statement that police pressured them to call off their protest on Sunday against the Shaheen Bagh agitation. The official twitter handle of Shaheen Bagh stated: "Today's Peace March has been postponed in view of section 144 applied at Shaheen Bagh Jasola Vihar. Our peaceful protest continues. come join us!"

Shaheen Bagh, near Jamia Millia Islamia, has been a protest venue for a section of people opposed to the Citizenship Amendment Act and the National Register of Citizens since December 15 last year.