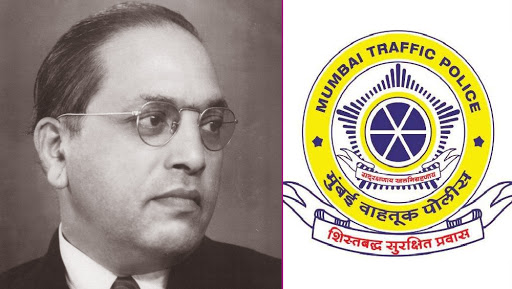 Mumbai, December 5: The Mumbai Police on Thursday issued a traffic advisory for the 63rd Death Anniversary of Dr Babasaheb Ambedkar. The traffic restrictions are in force from 3 pm on December 5 to 12 pm on Saturday, December 7. The various traffic restrictions and diversions are in place due to several events planned across the city on the occasion, commonly known as "Mahaparinirvan Din". Central Railway to Run 12 Special Trains on Dr Babasaheb Ambedkar's Mahaparinirvan Diwas 2019.

Stating that a large number of followers of Dr Babasaheb Ambedkar will visit Chaityabhoomi at Dadar on December 6, Mumbai Police press release said, “a large number of followers of Dr Ambedkar are likely to visit Chaityabhoomi, Dadar. The followers of Dr Babasaheb Ambedkar would start coming to Mumbai from 5th December 2019 and will remain till 7th December 2019. In view of this congregation on such a large scale at and around Shivaji Park, the movements of vehicular traffic will be effected on adjoining roads in the vicinity of Chaitya Bhoomi, Shivaji Park, Dadar." Remembering Dr BR Ambedkar ‘Father of Indian Constitution’ Through His Quotes.

One Way/ Closure of Roads

Meanwhile, Western Railway will run 12 special trains to clear extra rush on Dr Babasaheb Ambedkar's Mahaparinirvan Divas 2019. These trains will run from December 5 midnight. DR BR Ambedkar died on December 6, 1956, and since then, his death anniversary is marked as "Mahaparinirvan Divas" where pay people respect to the first law minister of India.