Kafeel Khan, the doctor embroiled in the August 2017 Gorakhpur hospital incident controversy, has written a book on the subject. 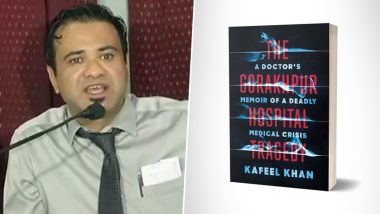 Lucknow, Dec 19: Kafeel Khan, the doctor embroiled in the August 2017 Gorakhpur hospital incident controversy, has written a book on the subject.

Titled, "The Gorakhpur Hospital Tragedy, A Doctor's Memoir of a Deadly Medical Crisis", the memoir presents Khan's version of the incident and subsequent developments that have kept him on the firing line ever since.

"My book is an honest, heartfelt account of the terrible events of 10 Aug 2017 and after. I dedicate it to all the parents who lost their children in the tragedy. This book is dedicated to those 63 children and 18 adults," says Khan. Uttar Pradesh Government Sacks Suspended Gorakhpur Doctor Kafeel Khan.

"I thought of giving readers facts and evidence. This is not only the story about me. It is about kids and adults who died, and about families who are waiting for justice."

The book, claims Khan, has stories that expose the system's failures and exposes "real culprits".

The Gorakhpur hospital tragedy took place on August 7, 2017 when oxygen disruption eld to the death of 63 children.

Khan relates the "gut-wrenching turmoil that followed - a suspension without end, an eight-month-long incarceration and a relentless fight for justice in the face of extreme apathy and persecution".

When asked if the book is timed keeping in mind the Uttar Pradesh elections, Khan said that he has been writing the book for a long time.

"The most important point the book talks about is the broken health system. The system collapsed. It also talks about doctors' struggle. The poor and the marginalised community depend on public hospitals. I have talked about the public health system."

Born in Gorakhpur, Khan had completed his MBBS and MD from Kasturba Medical College, Manipal, in Karnataka.

He was suspended from Baba Raghav Das Medical College's Nehru Hospital after the August 2017 incident.

With jail terms in between and after a long legal battle, Khan was terminated from service in November this year.

There are still cases pending against him in various courts.

(The above story first appeared on LatestLY on Dec 19, 2021 11:32 AM IST. For more news and updates on politics, world, sports, entertainment and lifestyle, log on to our website latestly.com).