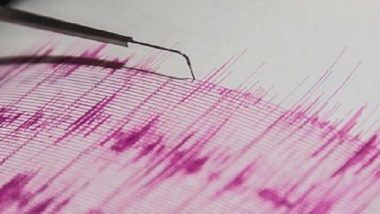 Patna, February 15: An earthquake jolted Bihar on Monday night. A quake of magnitude 3.5 on Richter scale occurred at around 9 PM. Tremors were felt in Patna. "An earthquake of magnitude 3.5, occurred 20 km north-west of Nalanda, Bihar at 9:23 pm today," said the National Center for Seismology. Earthquake in South Pacific: Tsunami Confirmed After 7.7-Magnitude Quake Jolts Coasts of Vanuatu Near New Caledonian; Australia on High Alert.

The earthquake had a depth of 5 km from the Earth's surface. So far no causalities have been reported. No immediate loss to property or life was recorded at the site of its occurrence. More details are awaited. Earthquake in India and Pakistan: Strong Tremors Felt in Jammu and Kashmir, Delhi, Gurugram, Noida, Punjab and Northern India.

Political leaders including RJD's Tejashwi Yadav, as well general people took to Twitter and posted about the earthquake tremors that shook the capital city of Bihar today.

Here are some of those reaction :

I wish everyone safety and plead all to be attentive, take safety precautions & move to safe open spaces if needed.

The states of northern India, including Punjab, Haryana, Delhi and some parts of Uttar Pradesh also experienced earthquake on February 12. " An earthquake of magnitude 6.1 on the Richter scale hit Amritsar, Punjab at 10:34 pm," the National Centre for Seismology had said.

(The above story first appeared on LatestLY on Feb 15, 2021 10:57 PM IST. For more news and updates on politics, world, sports, entertainment and lifestyle, log on to our website latestly.com).