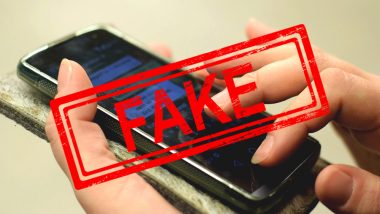 Thiruvananthapuram, August 2: Is Pakistan spreading fake news in India? According to IT experts in Kerala, several Pakistani WhatsApp groups are adding Indians as members and accessing their personal data while also spreading fake news. A Times Now TV report on Thursday said that the IT experts have raised a red flag about major cyber-intrusion by Pakistan based groups through WhatsApp.

According to the report, fake news is being spread, personal data is being stolen and chances of entrapment are high. The report quotes a complaint made by a cyber expert Moju Mohan to the police. Mohan has complained to the police saying that certain numbers from Pakistan send a url to individuals in India and when they click on the link, they are automatically added to a WhatsApp group, the admin of which is based in Pakistan.

Fake news is being spread, personal data is stolen and chances of entrapment are high. I.T. experts in Kerala have raised a red alert on large-scale cyber-intrusion from across the border. TIMES NOW accesses the complaint copy @DEKAMEGHNA takes you through it #PakFakeNewsFactory pic.twitter.com/iVYZrCne3j

The report says that Mohan has also cited a Multan based phone number believed to be behind this. He has said in his complaint that once a person is added to a particular group, the admin accesses everything that's on their phones.

India has witnessed over 30 cases of lynchings over the past few months due to rumours being spread over WhatsApp. Earlier this year, there were reports of how a Pakistani video was edited and spread as a child theft alert message across India. The reports said that a modified version of a video that was made for Karachi based Roshni Helpline’s Facebook page was being shared where the main crux of the original video was removed.

The news report is fake as there is no validity of the news report. When people click on the link, they are automatically added to a WhatsApp group, the admin of which is based in Pakistan.

(The above story first appeared on LatestLY on Aug 02, 2018 01:46 PM IST. For more news and updates on politics, world, sports, entertainment and lifestyle, log on to our website latestly.com).