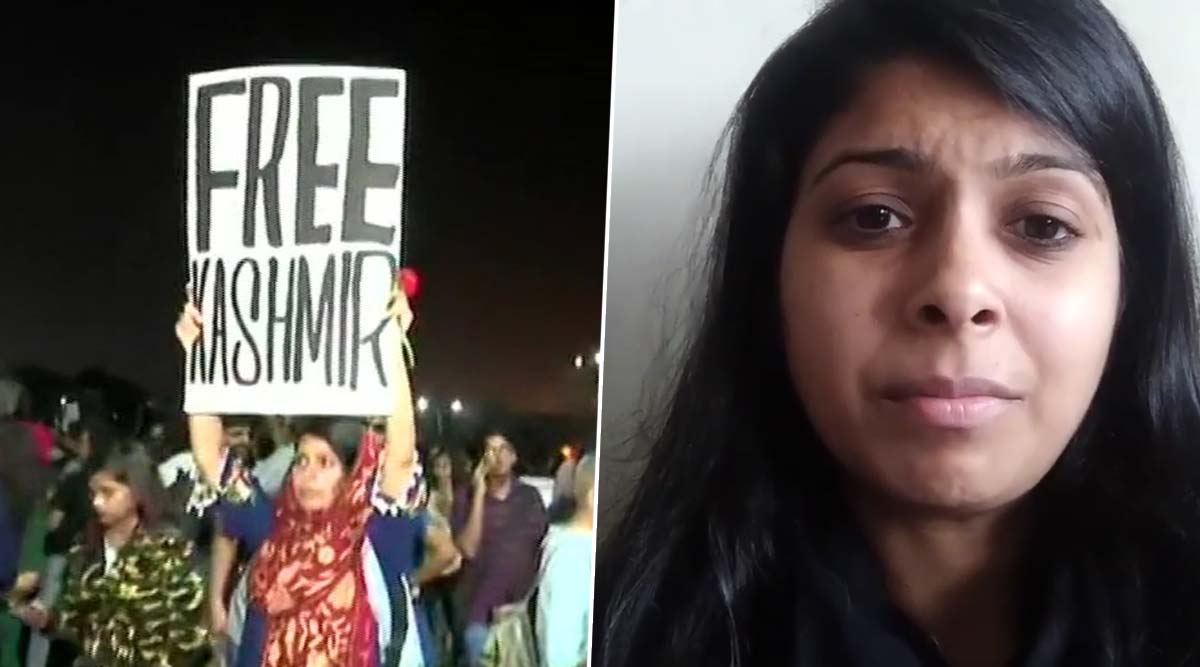 Mumbai, January 9: Shiv Sena has extended its support to Mehak Prabhu, who landed into eye of a storm for holding a "Free Kashmir" poster at a protest against JNU violence in Mumbai on Monday, saying that she lamented the plight of Kashmiri's in a peaceful manner but Opposition portrayed her act as treason.

In its mouthpiece Saamana, the party said, "Mumbaikar Marathi girl lamented the plight of people of Kashmir in a peaceful manner. However, the Opposition is terming it as an act of treason. There can be no worst example by the Opposition parties." 'Free Kashmir' Poster: FIR Against Mehak Mirza Prabhu For Holding Placard During Gateway of India Protest in Mumbai.

The editorial further slammed Opposition for targeting the state government on the matter.BJP leader Devendra Fadnavis had on Monday launched a scathing attack on Maharashtra Chief Minister Uddhav Thackeray after 'Free Kashmir' poster was seen during a protest at the Gateway of India.

Fadnavis said that the 'Free Kashmir Anti India campaign' was held two-kilometer away from the Chief Minister's Office (CMO). Taking to Twitter, former Chief Minister tweeted: "Protest is for what exactly? Why slogans of "Free Kashmir"? How can we tolerate such separatist elements in Mumbai? 'Free Kashmir' slogans by Azadi gang at 2km from CMO? Uddhav Ji are you going to tolerate this Free Kashmir Anti India campaign right under your nose??? @OfficeofUT"Fadnavis' reaction comes after a poster reading -- 'Free Kashmir' -- was seen at the Gateway of India on Monday during a protest against Sunday's violence in the Jawaharlal Nehru University in the national capital.

Mehak Prabhu, on Tuesday, clarified that she meant to highlight the restrictions imposed in Jammu and Kashmir and wishes to see peace in the region, adding she had no other motive behind her actions."At around 7 pm yesterday, I reached where the protest was happening at the Gateway of India. Like anybody else who believes in democracy, I also joined that protest. We were standing for justice to the JNU students," Prabhu said in a video posted on Facebook.

"I saw a bunch of people who were painting placards on every issue like NRC, CAA and for JNU students. There was a placard lying on the side which said 'Free Kashmir'. The first thing which came to my mind when I saw that placard was about the basic constitutional rights of Kashmiris," she said.

Prabhu also said that she is not a Kashmiri and was brought up in Mumbai. She outlined that she was standing with a flower in her hand and asserted that the entire matter was "completely blown out of proportion".