A Gujarat man got away with penalty despite riding a motorcycle without wearing a helmet. The man explained to cops that his head-size is so big that he was not able to find any helmet in the market which can fit onto his head. 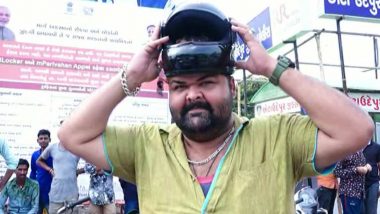 Ahmedabad, September 17: A Gujarat man got away with penalty despite riding a motorcycle without wearing a helmet. Zakir Mamon, a resident of Bodeli town in Gujarat's Chhota Udepur district, was stopped by the traffic police for not wearing a helmet. Cops asked him to pay a fine under the New Motor Vehicles (Amendment) Act, 2019. However, Mamon was let off after he revealed the real reason behind his inability to following the important rule. Bullock Cart Owner Fined Rs 1000 Under Motor Vehicles Act in Uttarakhand, Challan Cancelled As Cops Can't Penalise Bullock Cart As Per Rule.

Mamon explained to cops that his head-size is so big that he was not able to find any helmet in the market which can fit onto his head. "It is a unique problem and we have not fined him as we understand his issue. He is a law-abiding person and keeps all relevant documents while driving," Vasant Rathva, Assistant-Sub-Inspector, Traffic Branch, Bodeli town, was quoted by News18 as saying. Auto Driver Fined Rs 1000 in Bihar For Not Wearing Seat Belt Under New Motor Vehicles Act, Know Why.

Mamon said that he always carries all required documents while driving but he can't use a helmet. "I respect the law and I want to follow it by wearing a helmet but I have visited all the shops which sell helmets but could not find any helmet which can fit onto my head. I keep all relevant documents with me but as far as a helmet is concerned, I am helpless. I have told the police about my unique problem," Mamon said.

The Motor Vehicles Amendment Act, approved by President Ram Nath Kovind last month, aims at stricter punishment for violation of traffic regulations. Under the amended law, fines for violating other traffic rules have also been raised significantly. However, the Gujarat government had announced a reduction in the fines under the new law. The penalty for not wearing a helmet has been brought down from Rs 1,000 to Rs 500.

(The above story first appeared on LatestLY on Sep 17, 2019 01:26 PM IST. For more news and updates on politics, world, sports, entertainment and lifestyle, log on to our website latestly.com).