Helmet Mandatory: Karnataka Government to Suspend Driving Licence of 2-Wheeler Riders For 3 Months If They Ride Without Helmet 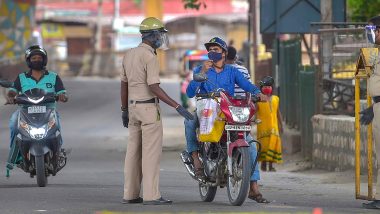 Bengaluru, October 20: All two-wheeler riders will now have to wear a helmet while riding a bike in Karnataka, otherwise driving licence of violators will be suspended for three months. As per new directives, helmets are mandatory for all two-wheeler riders who are over four years of age. The state government has imposed a three-month suspension of driving license along with a penalty in case of violation. Validity of Expiring Driving Licences And Other Motor Vehicle Documents Extended Till December 31.

According to Motor Vehicles (Amendment) Act 2019, the government can impose a fine of Rs 1,000 and can suspend a licence for three months. However, the state government had reduced the penalty amount from Rs 1,000 to Rs 5,00 after people protested against it. Notably, the three-month suspension rule was never imposed in the state. Motor Vehicle Act 2019: From Rear Seat Belt to Unsafe Vehicle, Five Lesser Known Traffic Violation Rules That Are Not New But Whose Fines Have Been Raised.

According to a report published in The Times of India, the Supreme Court-appointed committee on road safety held a video conference on October 14. It recommended the enforcement of stringent action against violators. Section 129 of the Motor Vehicle Act makes it compulsory for people above four years to wear a helmet while riding or being carried on a motorcycle.

According to the report, The number of cases booked by Bengaluru traffic police against riders without helmets was 16.4 lakh in 2018, 20.3 lakh in 2019. Meanwhile, over 20 lakh cases were registered in 2020 till September.

(The above story first appeared on LatestLY on Oct 20, 2020 09:08 AM IST. For more news and updates on politics, world, sports, entertainment and lifestyle, log on to our website latestly.com).