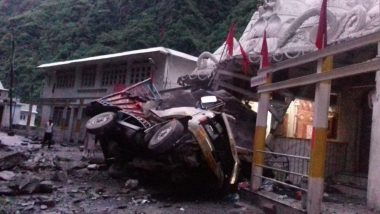 Himachal Pradesh, August 14: In a tragic incident, two people were killed, three injured after three vehicles were hit by boulders in a landslide near Hanogi Temple in Mandi district on Friday morning. The vehicles were en route Kullu to supply essential goods, including vegetables.

In a similar incident, a massive landslide occurred near at Malling Top area in Kinnaur. NH-5 got blocked following the landslide and has disrupted the traffic movement. No injuries were reported. Landslide in Uttarakhand: Landslide Damages Several Shops, Blocks Badrinath National Highway in Chamoli District.

2 Killed. 3 Injured After Three Vehicles Hit by Boulders in Landslide Near Hanogi Temple:

Himachal Pradesh: Two killed, three injured after three vehicles were hit by boulders in a landslide near Hanogi Temple in Mandi district this morning. The vehicles were enroute Kullu to supply essential goods, including vegetables. pic.twitter.com/4wwIx1yIcP

On Thursday, Kerala Governor Arif Mohammad Khan and Chief Minister Pinarayi Vijayan visited the landslide spot in Rajamalai in Idukki district as the death toll in the tragedy climbed to 55. The district administration informed that 15 people are still missing and rescue teams are still looking for them.

(The above story first appeared on LatestLY on Aug 14, 2020 08:15 AM IST. For more news and updates on politics, world, sports, entertainment and lifestyle, log on to our website latestly.com).