A 26-year-old man was arrested for allegedly duping people to the tune of Rs 10 lakh on the pretext of selling them Liposomal Amphotericin B injection which is used in the treatment of black fungus, police said on Friday. 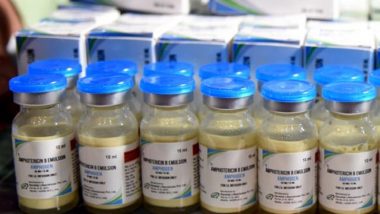 New Delhi, May 28: A 26-year-old man was arrested for allegedly duping people to the tune of Rs 10 lakh on the pretext of selling them Liposomal Amphotericin B injection which is used in the treatment of black fungus, police said on Friday.

The accused, Ayush Singh, was arrested from Sitapur district in Uttar Pradesh, they said, adding that he has cheated several people across India, including in the areas of Najafgarh, Dwarka, Mayur Vihar, Gurgaon, Noida, and earned about Rs 10 lakh so far. Beware of Fake COVID-19 Vaccine Registration Links, Fraudsters May Impersonate as Government Organisation to Dupe People, Warns MHA.

According to the police, a probe was initiated in the matter after several victims reported that they were duped by Singh when they got in touch with him for the injection through social media. When contacted, he promised to sell them the injection at Rs 25,000 each and asked for an advance payment. Soon after the online payment was made, he blocked their numbers. Fake Android Service App on Google Play Store Offering Free Netflix May Steal Your WhatsApp Data, Say Cybersecurity Researchers.

Deputy Commissioner of Police (Dwarka) Santosh Kumar Meena said that based on technical surveillance and call detail records and bank account statements of the accused, a team arrested Singh on Tuesday. 'During interrogation, the accused confessed to have cheated many people all over India on the pretext of providing Liposomal Amphotericin B injections with the same modus operandi and on his instance, two mobile phones, two ATM cards, and Rs 17,500 cash were recovered and Rs 96,000 of the cheated money was frozen in his account,' he said. Remdesivir Being Sold by the Name ‘COVIPRI’ Is Fake News! PIB Fact Check Warns People Not To Buy Medical Supplies From Unverified Sources.

Singh completed his B Com from Jaunpur in 2016. After that, he worked for a company in Mumbai as a supervisor for one-and-a-half years. In 2019, he got into the real estate business in Uttar Pradesh and amid the ongoing pandemic, he started duping people, the police said.