December 2020 added another feather to the cap of the Integral Coach Factory (ICF) as its new design vistadome tourist coach successfully completed the 180 kmph trial run. 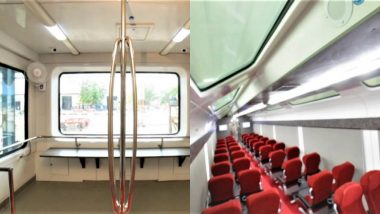 The announcement was made by Union Railway Minister Piyush Goyal.

It is rightly said, "Journey is best measured in terms of memories rather than miles."

Take a look at the new Vistadome coaches of Indian Railways that will give an unforgettable travel experience to passengers & will ensure that they truly have a journey to remember. pic.twitter.com/o2Srs0xR4B

He said, "Even squeeze test of the new vistadome coach was completed in ICF earlier this month."

The official said that the vistadome tourist coach has a larger viewing area including roof top glass with 44 seats for passengers with rotation up to 180 degrees. The coach also has a Wi-Fi-based passenger information system.

The official said that for the first time the vistadome coach has been built on the LHB platform, which is more safe.

Pointing out the stand-out features of the new vistadome coaches, the official said that they are equipped with air-spring suspension in secondary stage for better ride comfort, large glass windows and glass roof that boast electrically controlled opalescence, transparent roof for the passengers to get a panoramic view of their journey, observatory lounge with a larger window at one end.

The official informed that in the newly built coaches, a mobile charging socket has been provided for each passenger below the seat arm rest, entertainment system integrated with digital display screens and speakers for music lovers, "Content on Demand" Wi-fi facility provided on personal gadgets of passengers, wider entrance doors for persons with disabilities on wheel chairs and automatic sliding doors at the compartment's entry on both sides.

The new coaches are also equipped with a CCTV system for on board surveillance and have aesthetically designed interiors and FRP panelling, FRP modular toilets with pressurized flushing system and bio tanks and automatic fire detection with alarm system for safe travel.

The official said that the ICF will be manufacturing 10 such coaches at present.

He said that two coaches have been rolled out and the balance will be finished before March 31 next year.

The official stated that two coaches which were rolled out have gone to the Central Railway, one of which had cleared the speed trials.

The older version of the vistadome coaches mostly run in tourist locations where visitors can indulge in sightseeing. Some of the routes where these coaches are operated by the Indian Railways are Dadar and Madgaon, Araku Valley, Kashmir Valley, Darjeeling Himalayan Railway, Kalka Shimla Railway, Kangra Valley Railway, Matheran Hill Railway and Nilgiri Mountain Railway.

The ICF has turned out nine rakes of state-of-the-art 3 phase MEMU (Mainline Electric Multiple Unit) trains in December, the highest by any production unit of Indian Railways.

(The above story first appeared on LatestLY on Dec 30, 2020 02:17 PM IST. For more news and updates on politics, world, sports, entertainment and lifestyle, log on to our website latestly.com).