The fire fighting operations are continuing for second day in succession on the blazing very large crude carrier (VLSS) New Diamond chartered by Indian Oil Corporation (IOC), said the Indian Coast Guard. According to Coast Guard, the fire in the oil tankers crew accommodation area has been successfully doused. 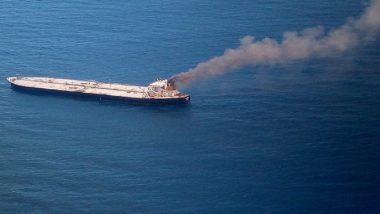 A two metre crack has been observed near Port aft portion 10 metres above the waterline, the Coast Guard said. The Coast Guard said the fire fighting operations are in progress in consultation with the Master of the oil tanker on board of its ship ICG Shaurya along with tug APL Winger. Three tugs are being engaged in boundary cooling operations.

The Indian coastal security agency has decided to deploy additional ships Ameya and Abheek and two Dornier aircrafts are also being used for air efforts. The oil tanker chartered by IOC was laden with near full load of its capacity caught fire on Thursday 37 nautical miles off the Sri Lankan coast. As per www.marinetraffic.com, the 20-year-old VLCC 'New Diamond' sailing under the Panama flag departed from Mina Al Ahmadi on August 23 and was heading to Paradip port in India. Sri Lankan Navy, Indian Ships Battling Fire on Board Oil Tanker, One Crew Dead.

The oil tanker was expected to reach Paradip in Odisha on September 5 where IOC has a large refinery. The vessel's deadweight tonnage (DWT) is 299986 t, length is 333 metres and width is 60 metres. The Indian Coast Guard said the Sri Lankan Navy had sought assistance to fight the fire and explosion on board New Diamond.

The Coast Guard on Thursday said it had diverted three of its ships -- Shaurya, Sarang, Samudra Paheredar and a Dornier aircraft for firefighting operations. However, IOC officials remained silent on the accident. Seeing the pictures of the ship on fire, a marine engineer told IANS that the engine room is gutted and it is not known whether the pump room -- where the pumps to pump out the crude oil are located -- too have been damaged.

He said if the pump room is damaged then it will be a great challenge to pump out the oil. According to reports, another ship Helen M an oil products tanker sailing under the Panama flag on receipt of distress message had gone to the location of New Diamond for rescue. Helen M was sailing from Mangalore to Kakinada in Andhra Pradesh.

(The above story first appeared on LatestLY on Sep 04, 2020 11:02 AM IST. For more news and updates on politics, world, sports, entertainment and lifestyle, log on to our website latestly.com).