Former Home Minister P. Chidambaram on Friday slammed the Modi-led government for insisting on elections in Jammu and Kashmir before granting statehood. 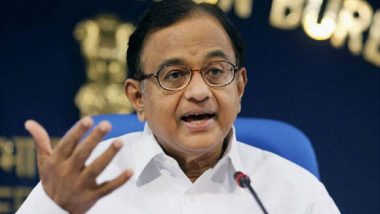 Chidambaram said in a tweet, "Congress and other J&K parties and leaders want Statehood first and Elections afterward, Government's response is Elections first and Statehood later.

Congress and other J&K parties and leaders want Statehood first and Elections afterward.

"The horse pulls the cart. A state must conduct elections. Only such elections under a State Election Commission will be free and fair. Why does the government want the cart in front and the horse behind? It is bizarre," he added. Delimitation Has to Happen at Quick Pace for Assembly Elections in Jammu and Kashmir, Says PM Modi After All-Party Meet.

The all-party meeting at Prime Minister Narendra Modi's residence at 7, Lok Kalyan Marg lasted for three and a half hours. It was attended by 14 leaders, including veteran politician and National Conference president Farooq Abdullah.

Most leaders stressed on the restoration of the political process in the Valley.

(The above story first appeared on LatestLY on Jun 25, 2021 09:40 AM IST. For more news and updates on politics, world, sports, entertainment and lifestyle, log on to our website latestly.com).