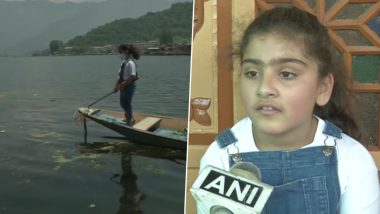 Srinagar, June 24: Inspiration for many, a seven-year-old girl has been on a mission to clean Srinagar’s Dal Lake since the past two years. Jannat’s story has now been in published in a textbook, which has been included in the curriculum of a Hyderabad-based school. Jannat undertook the task of cleaning the iconic lake when she was just five-year-old and was studying in KG class.

Speaking to news agency ANI, Jannat said, “I was inspired by my father to clean lake. All recognition I'm getting is due to my baba.” She had also received appreciation from Prime Minister Narendra Modi for her efforts. Jannat hit the headlines in 2018, when her video of cleaning the Dal Lake went viral. Dal Lake in Srinagar to Get Eco-Sensitive Zone Tag Soon.

J&K: Story of a 7-yr-old Jannat who has been cleaning Dal lake (Srinagar) since 2 yrs has been published in textbook that has been included in curriculum of a Hyderbad based school.She says,"I was inspired by my father to clean lake.All recognition I'm getting is due to my baba". pic.twitter.com/IMyFPCnVKv

After the abrogation of Article 370 and outbreak of coronavirus, life on the picturesque Dal Lake has come to a standstill. Shikaras are empty and parked along the edges of the lake. Due to this, shikarawallahs are struggling for their survival. In April, the J&K government announced a financial package of Rs 1,000 for the shikarawallahs for three months. According to shikarawallahs, the package is insignificant.

(The above story first appeared on LatestLY on Jun 24, 2020 05:22 PM IST. For more news and updates on politics, world, sports, entertainment and lifestyle, log on to our website latestly.com).