The officer told reporters in Poonch that the ploy was revealed after Special Operations Group (SOG) of the local police along with troops of the 49 Rashtriya Rifles detained two brothers -- Mustafa Iqbal Khan and Murtaza Iqbal of Galhuta village -- from their vehicle near Basooni in Mendhar sector at around 8 pm on Saturday. 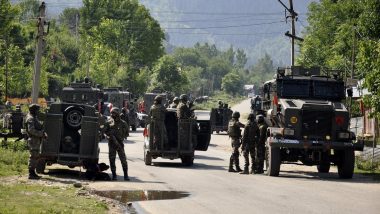 Jammu, December 27: The Jammu and Kashmir Police Sunday said it has arrested three Pakistan-linked militant associates and recovered six grenades from them, foiling a terror plot to attack a temple in the border district of Poonch and disturb communal harmony.

Poonch Senior Superintendent of Police Ramesh Kumar Angral said the arrested persons were planning to carry out a grenade attack on a temple at the behest of their Pakistani handler to disturb peace and communal amity in the district.

The officer told reporters in Poonch that the ploy was revealed after Special Operations Group (SOG) of the local police along with troops of the 49 Rashtriya Rifles detained two brothers -- Mustafa Iqbal Khan and Murtaza Iqbal of Galhuta village -- from their vehicle near Basooni in Mendhar sector at around 8 pm on Saturday. Amit Shah Says ‘Jammu and Kashmir Is First in India to Get Ayushman Bharat Benefits for All Its Citizens’.

He said their interrogation was conducted at the 49 Rashtriya Rifles Battalion headquarters, Basooni, and it was found that Mustafa had received a call from a Pakistani number and was directed to execute the grenade attack.

"On being questioned further, he admitted to have been tasked with throwing a grenade at a temple in Ari village. A video on how to use a grenade was also found in his phone," the SSP said.

The SSP said it came to light that Mustafa was involved in militant activities, and on his confession two of his associates -- Mohammad Yaseen and Rayees Ahmad of Dabbi village of Balakote near the Line of Control (LoC) -- were also apprehended. Another police official said the three were arrested later, while Murtaza Iqbal is still in custody and is being questioned.

The SSP added, "Vital clues were obtained during the questioning of the trio and searches were conducted in the house of Mustafa from where six grenades, some balloons with Pakistani marking and a few posters of hitherto unknown J&K Ghaznavi Force were recovered."

He said the arrested persons were in regular contact with their handlers in Pakistan who were instructing them to carry out terror strikes.

Terming the arrest of the trio as a "major success" for the security forces, Angral said a terror plot to incite communal violence has been averted with their arrest.

"If they had succeeded in their designs, we would have faced a lot of problems because they were intending to harm the brotherhood and communal harmony in the district," Angral said. Asked about the link between the arrested persons and the December 13 encounter in Dogrian village of Poonch which left two Paksitani terrorists dead, he said it is the follow-up of that very operation.

"We are investigating the route which they (the slain terrorists) used (to enter into this side from across the LoC) and the persons whom they had contacted. Whether these persons have any direct link with them is part of the investigation," he said.

Jammu-based Army PRO Lt Col Devender Anand said that with the arrest of the terrorists, the security forces have unearthed a nexus involving local terrorists which were involved in ferrying war-like stores and narcotics after smuggling them from across the border. Jammu and Kashmir: Young Entrepreneur Adnan Ali Khan From Shopian Helps Farmers to Sell Kashmiri Apples Online, Introduces New Packaging.

"It was an intelligence-based well-coordinated joint operation of the Army and police. The apprehended terrorists are likely from terror outfit Jammu and Kashmir Ghaznavi Force," he said, adding the search operation is still on.

"These terrorists were likely to carry out a blast with the intention to disrupt the communal harmony prevailing in the region. Their connection to Pakistani handlers is also being probed," he said. Other officials said some posters of Tehreek-ul-Mujahideen terror outfit were also recovered during the operations, threatening to intensify attacks on the security forces.