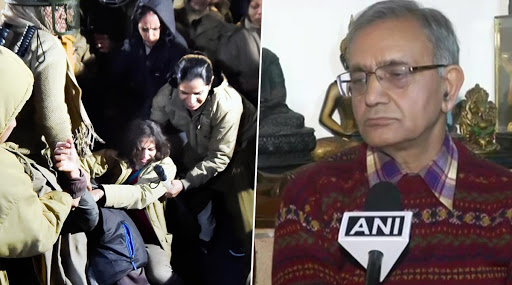 New Delhi, January 11: Former Vice Chancellor of Jawaharlal Nehru University SK Sopory on Friday called the recent violence at the varsity as 'disheartening' and said that such situations occur because of mistrust and lack of communication. He was of the opinion that these incidents decreases trust level among students and the people associated with academics.

Expressing his opinion, Sopory said, as news agency ANI quoted, "I have had an experience of working at JNU for over 25 years. The recent incidents of violence at the campus are very disheartening. Such situations occur because of mistrust and it's the lack of communication that decreases trust level." JNU V-C Jagadesh Kumar Meets Students to Discuss Violence on Campus, JNUSU Claims It Was 'Not Invited'.

SK Sopory, former JNU VC: I think the administration should take the initiative to talk to students. When I was there, my doors were always open. I always had a diary of the demands of the students. For demands which could be fulfilled, measures were taken accordingly.(10.01) https://t.co/sCLjEOxUra

Earlier in the day, JNU VC M Jagadesh Kumar met a group of students to discuss the situation and said that there is a high possibility of "outsiders" living in hostel being involved in the violence. However, JNUSU office bearers alleged that they were not informed about the meeting, nor they were called by the administration. JNU Violence: Delhi Police Identifies 37 Suspects for January 5 Incident From 60-Member WhatsApp Group 'Unity Against Left'.

Delhi Police sources claimed that they have shortlisted 37 suspects for January 5 violence in JNU from the the 60-member WhatsApp group 'Unity Against Left'. On Friday, it named nine suspects, including Jawaharlal Nehru University Students Union president Aishe Ghosh, for vandalishing CCTV cameras on January 3. According to the incident of the evening of January 5, around 50 masked men attacked the JNU students on the campus. Over 40 students, including Ghosh sustained injuries in the attack.