Former DMK lawmaker K Arjunan has been caught on camera abusing and assaulting an on-duty policeman near Salem in Tamil Nadu. 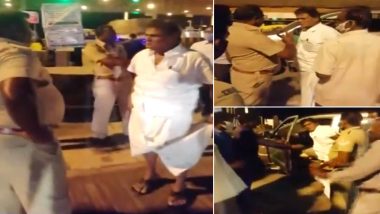 Salem, June 29: Former DMK lawmaker K Arjunan has been caught on camera abusing and assaulting an on-duty policeman near Salem in Tamil Nadu. The incident took place on Sunday when police stopped K Arjunan's vehicle for checking e-pass which is necessary for travel in Tamil Nadu amid the coronavirus lockdown. Upon being asked for e-pass, Arjunan lost his cool, pushed, kicked and verbally abused a cop. A video of the incident is going viral on social media. #JusticeforJayarajAndFenix: Tuticorin Custodial Death Sparks Anger in Tamil Nadu, Netizens Demand Justice For Slain Father-Son Duo.

According to reports, Arjunan's vehicle was stopped by cops at a toll gate near Salem. The former DMK MP had a heated argument with a policeman. He then pushed the cop and verbally abused him. The cop also pushed him once in reaction. Arjunan then kicked him. Other policemen and some people intervened and separated the two. Due to the lockdown in Tamil Nadu, it is mandatory for citizens to carry e-pass in case of travelling from one city to another.

#WATCH: Former MP K Arjunan hits a police personnel on duty near Salem check-post who sought an e-pass from him as per #COVID19Lockdown guidelines. #TamilNadu (28/6) pic.twitter.com/siSU2fukIp

Tamil Nadu so far has reported 82,275 confirmed coronavirus (COVID-19 cases, of which, 1,079 have died, 45,537 have recovered and 35,659 are active cases. The state government announced a strict lockdown in four districts - Chennai, Kancheepuram, Tiruvallur and Chengalpattu - till June 30. While relaxations have been given during other days but on Sundays, the relaxations will not apply.

(The above story first appeared on LatestLY on Jun 29, 2020 11:42 AM IST. For more news and updates on politics, world, sports, entertainment and lifestyle, log on to our website latestly.com).