"In earlier times, the industries were ready to do their work but the government was like a 'Not Gate'. When any input flows into the 'Not Gate', it gets negated. So, many different compliances and no ease of doing business... but we understand that the government must be like the 'And Gate'. 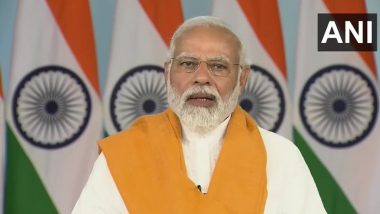 Bengaluru, April 29: Asserting that the government has put in place a supportive policy environment, Prime Minister Narendra Modi on Friday urged the industry to make India a semiconductor hub of the world based on the principles of high technology, high quality and high reliability.

In his inaugural address at the Semicon India-2022 conference here, Modi said the country has the appetite for "technology and risk-taking" and emphasised that hard work has been done over the last few years to create an environment that encourages growth.

"We want to work in this direction based on the principle of high tech, high quality and high reliability," Modi said. The prime minister took a jibe at earlier governments for not working in sync with the industry by mentioning 'Not Gate' and 'And Gate' -- technical terms that are common in the semiconductor industry parlance.

"In earlier times, the industries were ready to do their work but the government was like a 'Not Gate'. When any input flows into the 'Not Gate', it gets negated. So, many different compliances and no ease of doing business... but we understand that the government must be like the 'And Gate'. PM Narendra Modi Inaugurates Semicon India Conference in Bengaluru.

"While the industry works hard and the government must work harder. I would like to assure you that we will continue to support the industry in future as well," Modi said. Generally, 'Not Gate' refers to doing the opposite of the command received while 'And Gate' implies combining two commands received for generating high output. India is working on ways to boost the semiconductor industry in the country and make indigenous semiconductors.

"We have put the urge in your favour as far as possible through a supportive policy environment. We have shown that India means business. "Now it is over to you. I look forward to practical suggestions from all of you about how we can move towards an India that is a hub for semiconductors for the world in coming years," Modi said.

The prime minister also said the government is building the digital infrastructure to connect 1.3 billion Indians and the country has one of the largest per capita consumption of data.

"We are on our way to connect 6,00,000 villages with broadband. We are investing in developing capacity in 5G, IoT and clean energy technologies. We are working to unleash the next wave of innovation in data, AI and other technologies.

"India is headed for robust economic growth. We have the world's fastest-growing startup ecosystem. New unicorns are coming up every few weeks," Modi said. Further, he noted that the government has abolished more than 25,000 compliances and has given a push towards auto-renewal of licenses.

"A new world order is forming and we must see this opportunity. We have worked hard over the last few years to create an environment that encourages growth. India has the appetite for tech and risk-taking," the prime minister said.

Speaking at the event, Electronics and Communications Minister Ashwini Vaishnaw said that electronics manufacturing in India has already reached USD 76 billion and is on the way to USD 300 billion. "The way the smartphone usage and the 5G industry is growing, it's going to see a very high growth for semiconductors in the coming years."

The government has received proposals from five companies for setting up the electronic chip and display manufacturing plants with an investment of Rs 1.53 lakh crore. Almost 100 academic institutions and R&D organisations have been roped in to train 5,000 professionals, 30,000 in research and 50,000 at floor level, he said.

"This is a very big commitment to augment our talent nation station. 250 semiconductor design companies are working out of India. 24,000 design engineers, who design 2,000 chips every year is what we understand from the industry," Vaishnaw said. Vedanta Foxconn JV, IGSS Ventures and ISMC propose to set up electronic chip manufacturing plants with USD 13.6 billion investment and have sought the support of USD 5.6 billion from the Centre under the Rs 76,000 crore Semicon India Programme.

Vedanta and Elest have proposed to set up display manufacturing units -- used in mobile phones and laptops, among others -- with a projected investment of USD 6.7 billion. They have sought the support of USD 2.7 billion from the Centre under the scheme for setting up display fabs in India.

Vaishnaw said the government is expected to grant them approvals in the next 6-8 months and then invite proposals for the next round of investments in the semiconductor space.

"We have a roadmap for 20 years. This is just the beginning," he said. Minister of State for Electronics and IT Rajeev Chandrasekhar said India is creating demand for semiconductors in the country by growing electronics manufacturing. At present, he said that India's share is 2-3 per cent in global electronics, which the prime minister wants to increase to 7-8 per cent by 2025-26.