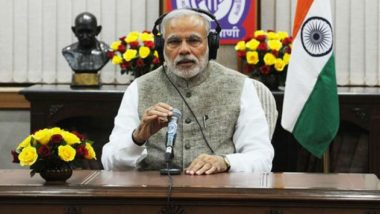 Meanwhile, this is Prime Minister Narendra Modi's first radio program after the government announced the Unlock 2. Earlier, the Premier had invited ideas and urged people to share "inspiring anecdotes of how collective efforts have brought about positive changes."

Meanwhile, it is worth to note that July 26 is also celebrated as the Kargil Vijay Diwas, which is marked to tribute our war heroes who lost their lives in the Kargil war to win victory over Pakistan while recapturing Indian posts that were occupied by Pakistani infiltrators.

(The above story first appeared on LatestLY on Jul 26, 2020 10:40 AM IST. For more news and updates on politics, world, sports, entertainment and lifestyle, log on to our website latestly.com).