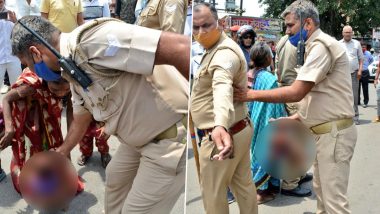 Meerut, June 23: Pictures of Uttar Pradesh police went viral on social media, in which a cop could be seen holding a baby in an objectionable manner Meerut’s Begumpul area. According to reports, police went to the area to mediate between the two groups.  According to the Meerut police, the fight erupted between the two groups at the Begumpul area. Among the people were some drug addicts. The incident took place on June 22.

In the pictures which went viral on various platforms of social media, the cop could be seen holding the kid by the arm. After the images went viral, netizens criticised the action of the cop. As per the police, in the Lalkurti area under the Begampul police station, some people in inebriated condition pelted stones at police when the cops went their to mediate. UP Shocker: Two 11-Year-Old Boys Tied to Tree, Beaten Mercilessly for Plucking Jamuns from Tree in Lakhimpur Kheri; Accused Arrested.

SP City Meerut said that when the fight was going on between the two groups, some people left their children at that place without caring about their safety. Police went there to protect them. He further added that action was taken against the people involved in the dispute.  After the images went viral, an enquiry has been ordered into the incident.

(The above story first appeared on LatestLY on Jun 23, 2021 04:49 PM IST. For more news and updates on politics, world, sports, entertainment and lifestyle, log on to our website latestly.com).