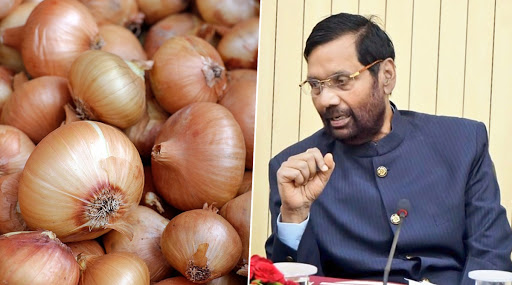 New Delhi, December 12: With reports of onion prices likely to fall by 5O percent in the coming two weeks making the headlines, Union Minister of Consumer Affairs, Food and Public Distribution -- Ram Vilas Paswan -- on Thursday informed that Centre has contracted an additional 12,660 metric tonnes of onions which will begin arriving in India from December 27, 2019.

According to the latest developments, as reported by news agency ANI, Centre has contracted an additional 12,660 metric tonnes of onions to give respite to the people of the country. The supply is expected to arrive from December 27, 2019. Following this, the total quantity of imports that have been contracted so far reaches approximately 30,000 metric tonnes. Onion Prices Likely to Fall by 50% in Next Two Weeks, Says Report.

Apart from this, the Union Minister had written to all Chief Ministers of states and asked them to carry out immediate anti-hoarding operations so that supplies in the markets are augmented. Also, Paswan had asked the state administrations to check the stock holding limits and ensure that they are strictly enforced.

Earlier on Tuesday, Union Minister of Consumer Affairs, Food and Public Distribution Ram Vilas Paswan informed the Lok Sabha that onion prices have increased by 400 percent after March as the average retail price of onion on December 3, 2019, was recorded to be Rs 81.9 per kg as compared to Rs 15.87 per kg in March 2019.

While on Wednesday, reports arrived that the prices might fall by 5O percent in the coming two weeks, as a new arrival from Maharashtra, Gujarat and Karnataka would reduce the prices of red bulbs. On December 10, the kitchen staple was being traded in Lasalgoan -- India’s largest wholesale onion market -- at Rs 41 per kg as against Rs 71 on December 7.