A 17-year-old girl from Madhya Pradesh's Bhopal has alleged that her father had sexually harassed her. 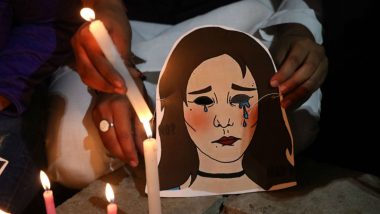 Bhopal, October 20: A 17-year-old girl from Madhya Pradesh's Bhopal has alleged that her father had sexually harassed her after her mother died of COVID-19 around three months ago. The girl lodged a complaint at Habibganj police station on October 18. Acting on the complaint, police registered an FIR against the accused father. Meanwhile, the girl and her two younger brothers were shifted to Childline. Madhya Pradesh Shocker: Man Sexually Harasses His Daughter in Bhopal; Arrested.

In her complaint, the girl said her father sexually harassed her for the first time on the night of October 15. She said she was sleeping on the sofa at her home. When her father came home late at night, he allegedly pressurised her to sleep next to him. As he is her father, she agreed. While she was sleeping, her father sexually harassed her, she alleged. Bhopal Shocker: Woman Allegedly Sets Herself on Fire After Fight With Neighbour.

"When the girl protested and tried to raise an alarm to wake her younger brothers for help, the accused smothered her mouth with his hands and tried to strangulate her while threatening of dire consequences," Investigating Officer Sub-Inspector Sunita Bhalrai was quoted by Times of India as saying. The accused father allegedly repeated the act on October 17 after which the girl narrated her ordeal to a relative.

The girl's relative then contacted an NGO, which approached the minor and counselled her. "On Monday, the girl reached Habibganj police station along with the NGO members to file a complaint. Acting on her complaint, a molestation case was registered against the accused," the Sub-Inspector said.

(The above story first appeared on LatestLY on Oct 20, 2021 10:29 AM IST. For more news and updates on politics, world, sports, entertainment and lifestyle, log on to our website latestly.com).